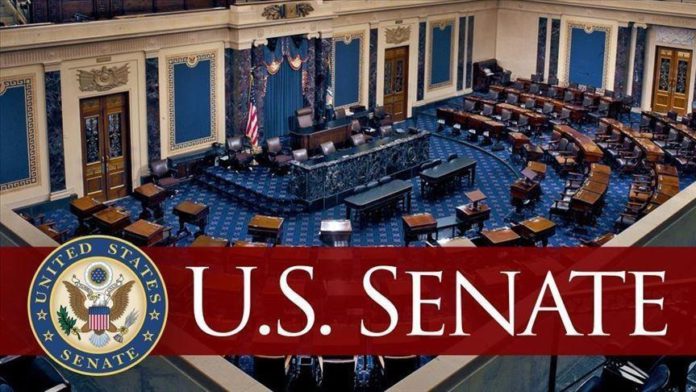 The US Senate voted largely along party lines Tuesday to confirm it is within their power to try former President Donald Trump even though he already left office.

The Senate’s 56-44 vote saw six Republicans join ranks with all the chamber’s Democrats in agreeing the process is in-line with the US Constitution.

Senators earlier heard arguments from both the House managers prosecuting the case, and Trump’s defense team, as they weighed whether or not there was standing for the case against the former president to go forward.

Impeachment trials are intended to result in a president’s removal from office if the individual is convicted of committing high crimes and misdemeanors, the legal threshold prosecutors must meet.

Trump’s defense sought to argue that the trial was moot since Trump left office following his Nov. 3 electoral defeat. Lead defense attorney Bruce Castor acknowledged Trump “was removed by the voters” despite his client’s repeated insistence that the election was “stolen” from him via widespread voter fraud.

That defense, however, was rebutted ahead of its formal roll out by prosecutors who said it would create a “January exception,” allowing for an outgoing president to act without regard for the law in his final days in office.

“It’s an invitation to the president to take his best shot at anything he may want to do on his way out of the door, including using violent means to lock that door, to hang on to the Oval Office at all costs, and to block the peaceful transfer of power,” said Congressman Jamie Raskin, the lead prosecutor on the case. “The January exception is an invitation to our founders’ worst nightmare.”

Trump stands accused of inciting the fatal Jan. 6 Capitol riot that resulted in five deaths, including a Capitol Police officer. Two other law enforcement officers who sought to defend the federal legislature that day took their lives in the aftermath.

Raskin, who is a professor of Constitutional law, said the argument for conviction that his team would be making is going to be based on “cold, hard facts.” He then proceeded to play a 20-minute video chronicling the events that day, starting with Trump’s remarks to his supporters just minutes before the Capitol was besieged.

Trump told the masses at the nearby Ellipse to “fight like hell” as lawmakers prepared to carry out a constitutionally-mandated count of Electoral College votes that was a key step to US President Joe Biden’s inauguration.

The prosecution’s video showed the chaos that followed in grisly detail, as Trump’s supporters overran barricades, clashed violently with police and smashed their way through the Capitol’s windows. Inside they could be heard repeatedly asking where “they” are, likely referring to Democratic lawmakers and former Vice President Mike Pence, for whom a gallows was likely erected outside the Capitol.

The insurrectionists repeatedly chanted “hang Mike Pence” inside the Capitol after he rejected Trump’s call to reject the vote count.

“The president was impeached by the US House of Representatives on January 13th for doing that,” Raskin said after the video played. “If that’s not an impeachable offense then there’s no such thing.”

Trump has repeatedly alleged the election was “stolen” from him, but he has not offered any proof to back his claims, and a Justice Department probe of voter fraud failed to develop any evidence that would have supported the notion. He was also dealt repeated legal defeats in court, including by the Supreme Court.

Oral arguments will begin Wednesday with each side allocated 16 hours to make their case. The trial is expected to continue through the weekend.

How are South American countries coping with COVID-19?