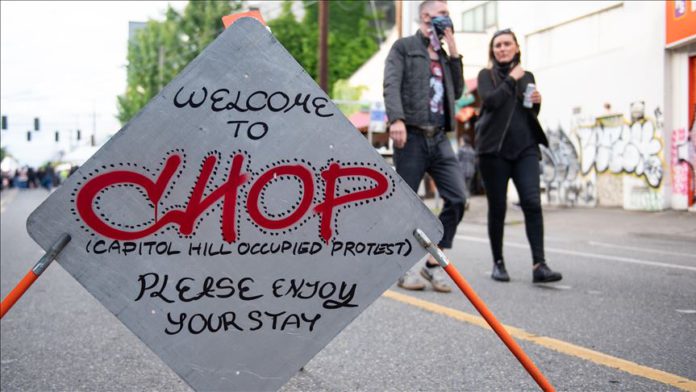 Best said the order comes after weeks of violence in and around the CHOP zone, including four shootings that resulted in multiple injuries and the deaths of two teens. Police have also reportedly documented robberies, assaults, and other violent crimes.

The police chief said she supports peaceful demonstrations linked to the death of George Floyd to make “meaningful” change “but enough is enough. The Chop has become lawless and brutal.”

Seattle Police Department said 13 people have been arrested and protesters are asked to leave the immediate area in less than 10 minutes before intervention.

Floyd, 46, an unarmed black man, died after being pinned down May 25 by a white police officer in Minneapolis, Minnesota after reportedly attempting to use a counterfeit $20 bill.

Following Floyd’s death, protesters have broadened demands for police reform to include the removal of statutes and names honoring slavery and colonialism in the US.

US President Donald Trump took to Twitter to defend monuments and locations dedicated to Confederate generals who have fought against the abolishment of slavery.

“I will Veto the Defense Authorization Bill if the Elizabeth ‘Pocahontas’ Warren (of all people!) Amendment, which will lead to the renaming (plus other bad things!) of Fort Bragg, Fort Robert E. Lee, and many other Military Bases from which we won Two World Wars, is in the Bill!,” he said Wednesday.

The president also issued an executive order to protect such monuments and said those who harm them will face an excess of a 10-year prison term.

The Confederacy were southern states that seceded from the union on the issue of slavery.