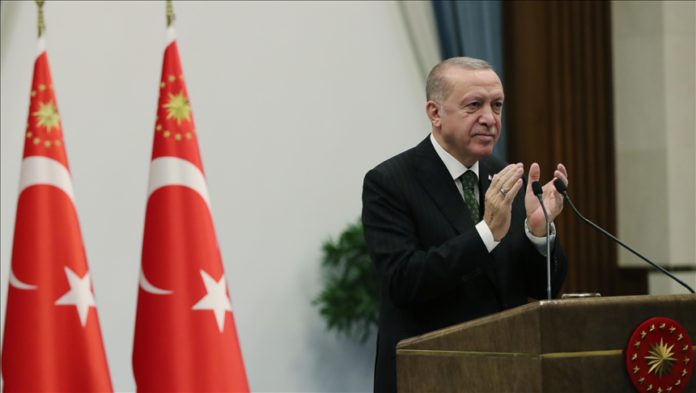 US sanctions announced this week are a “blatant attack” on Turkish sovereignty, the nation’s president said Wednesday.

Turkey is the first NATO member to face such sanctions, Recep Tayyip Erdogan said at a highway opening ceremony, pointing to the double standard in slapping such sanctions on Turkey.

The sanctions seek to make the country’s defense industry dependent, but Turkey is determined to boost its industry to the top, he added.

Turkey will not be deterred but instead will work twice as hard to improve the defense sector and make it totally independent, Erdogan vowed.

“The EU’s sanctions threats were on our agenda over the past weeks and yesterday the US sanctions, which were on agenda for a while, were announced. I am quite clear, regarding CAATSA, no country other than Turkey has been slapped with these sanctions since 2017,” he said.

He added: “For the first time, [sanctions] have been imposed on our country, a NATO member. What kind of alliance is this? This decision is a blatant attack on our country’s sovereignty rights.”

The Turkish president went on to say that sanctions over the purchase of the Russian S-400 defense system were a “mere excuse” and there was no logical explanation regarding Turkey’s exclusion from the F-35 fighter jet program, for Ankara has made most of the payment.

Turkey will mind its own business without getting deterred by such sanctions, according to Erdogan, who said Turkey was now more determined to boost its defense sector.

Recalling that Turkey was under an arms embargo following its peace operation on the island of Cyprus in 1974, the president said the sanctions back then laid the foundations of the country’s defense industry and fresh sanctions would only enhance Turkish ambitions to take its defense sector to top-notch global tier.

Furthermore, the Turkish leader said final trials of Hisar-A+ — Turkey’s first-ever domestically produced air defense system — were concluded and a target plane was successfully downed by the system on Dec. 11.

Turkish authorities also complain that Greece, a NATO member, had acquired Russian S-300 missiles but did not face any sanctions. Furthermore, Athens used S-300 systems during a NATO exercise on the island of Crete in November where NATO members Germany, the Netherlands and the US also participated.

Officials also point out American hypocrisy regarding sanctions over Ankara’s purchase of Russian systems as many of US’s non-NATO allies such as South Korea, the United Arab Emirates, Kuwait, Jordan and Saudi Arabia also had military ties with Moscow.