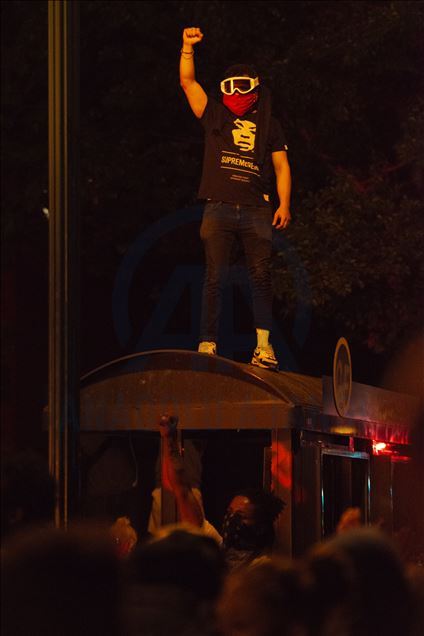 A fire broke out at the Minneapolis Police Department’s 3rd Precinct building late Thursday amid protests over the death of George Floyd, an unarmed black man who died after being pinned down by a white police officer.

MINNESOTA, USA – MAY 28: A protestor stands on a bus shelter as the Minneapolis 3rd precinct burns on Thursday, May 28, 2020, during the third day of protests over the death of George Floyd in Minneapolis. Floyd died in police custody in Minneapolis on Monday night, after an officer held his knee into Floyd’s neck for more than 5 minutes. ( Steel Brooks – Anadolu Agency )

Angry demonstrators stormed the building and could be seen in videos circulating on social media chanting “What’s his name? George Floyd!” — shouting the name of the man whose last words were “I can’t breathe.”

On the third day of the protests, police clashed with some demonstrators as peaceful rallies took place.

“In the interest of the safety of our personnel, the Minneapolis Police Department evacuated the 3rd Precinct of its staff,” Minneapolis police said in a statement. “Protesters forcibly entered the building and have ignited several fires.”

The latest move came hours after Hennepin County Attorney Mike Freeman said he will not “rush” to charge the four officers involved in Floyd’s death on Monday.

“That video is graphic and horrific and terrible, and no person should do that,” Freeman said. “But my job in the end is to prove that he violated a criminal statute, and there’s other evidence that does not support a criminal charge,” he added, referring to the officer who had his knee on Floyd’s neck.

Later, a video circulating on Twitter showed that military trucks arrived in Minneapolis. The authenticity of the video could not be confirmed.

Meanwhile, President Donald Trump said on Twitter that there was “a lack of leadership” in Minneapolis.

“I can’t stand back & watch this happen to a great American City, Minneapolis. A total lack of leadership. Either the very weak Radical Left Mayor, Jacob Frey, get his act together and bring the City under control, or I will send in the National Guard & get the job done right….,” Trump said.

“These THUGS are dishonoring the memory of George Floyd, and I won’t let that happen. Just spoke to Governor Tim Walz and told him that the Military is with him all the way. Any difficulty and we will assume control but, when the looting starts, the shooting starts. Thank you!,” he added.