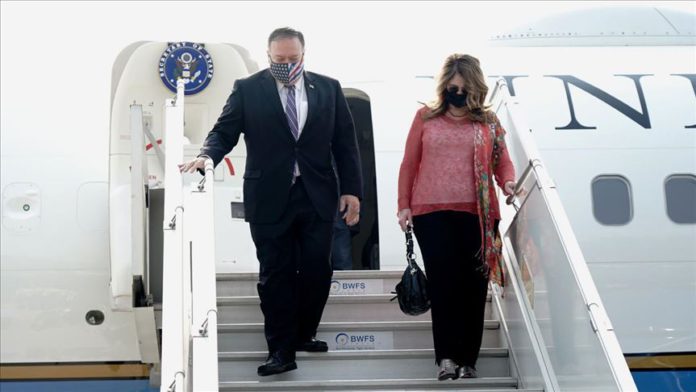 Stepping up his efforts to restrain China’s growing footprint in the Asia-Pacific region ahead of US presidential elections on Nov. 3, US Secretary of State Mike Pompeo’s five-day tour was full of anti-Beijing rhetoric targeting the Communist Party of China.

The itinerary of Pompeo’s tour included a visit to the island nation of Maldives for the first time in two decades and coincided with 25 years of diplomatic relations between the US and Vietnam.

In his meeting with Maldives President Ibrahim Mohamed Solih and Foreign Minister Abdulla Shahid, Pompeo said the two sides discussed plans for an “economic recovery and ways we can cooperate to increase security and counter terrorism.”

The US will also open an embassy in the country, he added.

In the capital Male, Pompeo lashed out at China’s “lawless and threatening” behavior, its “trashing the environment” and “seeking to entrap small nations in skeins of debt.”

“The ties between the US and Maldives benefit both our nations, and our strong cooperation advances peace and security in the Indian Ocean region,” the top diplomat added.

In India, where he held a 2+2 dialogue alongside US Defense Secretary Mark Esper with their Indian counterparts, Pompeo denounced the CPC as “no friend to democracy, the rule of law, transparency, nor to freedom of navigation — the foundation of a free and open and prosperous Indo-Pacific.”

“In New Delhi, we held our third US-India 2+2 Ministerial, which reinforced our strong bilateral ties. The US is proud of our relationship with India as we continue to cooperate on a breadth of issues, including security in the Indo-Pacific region,” said Pompeo after his visit.

Countering China’s influence in the region remained the focus during his trip to Sri Lanka, which is also a close ally of Beijing.

“In Sri Lanka and Maldives, I was proud to meet with my counterparts to discuss the issues that affect us most in the region and beyond. Our partnerships are critical and will only make us safer and more secure at home in the Indo-Pacific region and around the world,” he said.

“My meetings with President @GotabayaR [of Sri Lanka] and Foreign Minister [Dinesh] Gunawardena reaffirmed Sri Lanka’s pivotal role as an Indo-Pacific partner. Together, we’re committed to advancing our shared interests in the region, including security, stability and prosperity,” he tweeted.

Pompeo also laid a wreath at the Shrine of St. Anthony, one of the sites of the 2019 Easter Attacks which killed and injured hundreds of people.

“We stand with the Sri Lankan people and the world to defeat violent extremism and bring perpetrators to justice,” he said.

“Our cooperation on health and humanitarian issues is strong, and the approaches we discussed to post-pandemic recovery will ensure sustainable and inclusive long-term development,” Pompeo said after meeting his Sri Lankan counterpart.

However, after Pompeo meet President Gotabaya Rajapaksa, the Sri Lankan president tweeted: “Sri Lanka will always maintain a neutral stand in foreign policy and will not get entangled in struggles between power blocs.”

Coinciding with silver jubilee of bilateral relations with Vietnam, Pompeo said the US renewed its commitment to a “strong and independent Vietnam” during his visit.

“I announced an additional $2 million in @USAIDSaveLives assistance to support response efforts to severe floods in central Vietnam,” Pompeo said as his visit followed devastating floods in the Southeast Asian country.

In his meeting with Vietnamese Prime Minister Nguyen Xuan Phuc, Pompeo said: “We have enormous respect for the Vietnamese people and your country’s sovereignty.”

“We look forward to continuing to work together to build on our relationship and to make the region — throughout Southeast Asia, Asia and the Indo-Pacific — safe and peaceful and prosperous.”

The US secretary of state said later in a tweet that “we are committed to a peaceful and prosperous Indo-Pacific with ASEAN.”

“Together, we are elevating the US-Vietnam security partnership,” he added.

In Indonesia, Pompeo delivered a talk on religious pluralism.

“The US and Indonesia share a strong commitment to religious tolerance, democracy and pluralism. I was honored to reaffirm the importance of these values,” he said about his speech in the country.

In his meeting with President Joko Widodo, Pompeo called for “promoting a prosperous, secure and democratic Indo-Pacific.”

He added that Indonesia was a “strong advocate for upholding international law in the Indo-Pacific. I look forward to strengthening the US-Indonesia Strategic Partnership.”