TurkishPress
Home Americas US & Canada US: Police violence against blacks in near history 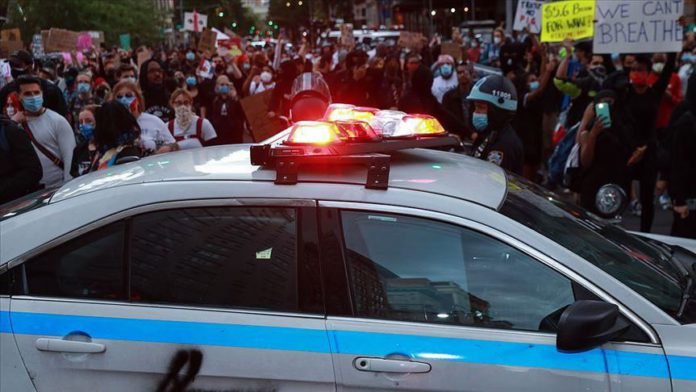 George Floyd’s death was the blasting point in the US after police violence killed 7,666 lives in a very near history, with majority of them black people.

Floyd, 46, an African American man, died last week in the state of Minnesota when a police officer knelt on his neck for nearly nine minutes. His last words, “I can’t breathe,” became the slogan of nationwide protests.

According to the data compiled by Mapping Police Violence website, citing security sources, the rate of black people — 13.4% of the population — killed by police was two and a half times higher than white people in 2013-2019.

While 95% of the killings occurred during arrests, California, Texas and Florida are the states with the highest level of police violence.

Founded in 2013, the non-governmental organization Black Lives Matter led the countrywide demonstrations to put an end to police brutality.

The phrase became a rallying point for protesters demonstrating against the killings of unarmed black men and women by police. It continued to resonate even nearly six years later.

A month after Garner’s murder, nationwide protests were held in Ferguson, Missouri, after the murder of 18-year-old Michael Brown. The protests turned violent and were marred by looting and arson and some cities imposed a curfew.

In August 2014, Ezell Ford was targeted by police bullets in Los Angeles, followed by Akai Gurley’s death, 28, in New York, and Tamir Rice, 12, in Cleveland in November 2014.

While all these events led to individual demonstrations, thousands gathered in front of a large shopping center in Bloomington, Minnesota in December 2014, protesting the US violence against unarmed black citizens. Tens of people were detained in these protests.

On Oct. 20, 2014, Chicago police officer Jason Van Dyke killed a black teenager Laquan McDonald — who was carrying a knife — firing 16 shots from a distance of about 3 meters (9.8 feet).

Dyke, detained for first-degree murder, was released on bail on Nov. 30, 2014. The incident led to protests which raged once more after police released the footage 400 days later.

In May 2015, the Black Lives Matter movement called for demonstrations named Say Her Name in memory of women and girls who died as a result of police violence in the country and large protests were organized in many cities.

In November of the same year, clashes took place between police and demonstrators in 18-day protests in Minneapolis, after 24-year-old Jamar Clark was shot and killed by the police. Some protestors were involved in actions such as looting and vehicle arson.

Protests return in 2016 with killing in Charlotte

Keith Lamont Scott, 43, was killed by police on Sept. 20, 2016 in Charlotte, North Carolina. After protests turned violent, a state of emergency was declared by the state’s governor to gain control over the protesters.

In March 2018, the killing of Stephon Clark by the police in the garden of his grandmother’s home in Sacramento, California led to massive protests and vandalism.

* Beyza Binnur Donmez from Ankara contributed to this story