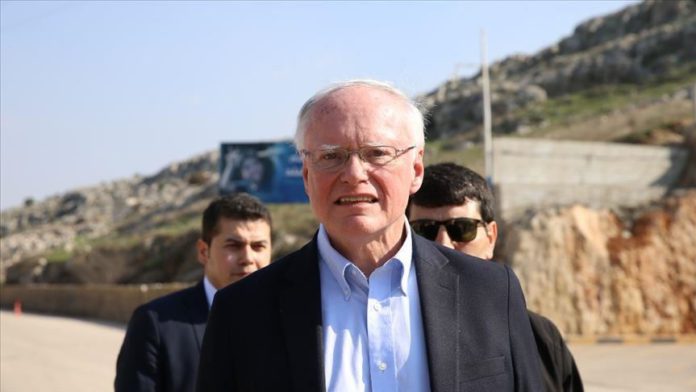 The US is pleased with the talks between the YPG/PKK terrorist group and the Syrian Kurdish National Council (ENKS), Iraq’s Kurdish Regional Government (KRG) said in a statement.

President of the semi-autonomous Kurdish region, Nechirvan Barzani, held a meeting with US special envoy for Syria James Jeffrey during which the latter stated that his country was pleased with the talks for rapprochement, the KRG said.

The meeting held in KRG’s capital Erbil tackled the situation of foreign forces in Syria and security developments.

The two sides also discussed developments regarding the coronavirus outbreak in Syria and Iraq as well as relations between Erbil and Baghdad and the Kurdish problem in Syria, the statement said.

According to the statement, Jeffrey thanked Barzani and the KRG for their positive role in the negotiations between Kurdish groups in northern Syria to come closer and to resolve their problems.

Barzani, for his part, thanked Washington and the US-led coalition forces for their continued support and their efforts to eliminate terrorism, the statement said.

In a related development, local sources said that Jeffrey had claimed during a Monday meeting with YPG/PKK leaders and ENKS representatives that Turkey will not launch a new military operation in the region.

During the al-Hasakah meeting, Jeffrey called on both Kurdish groups to reach reconciliation as soon as possible and assured them that Turkey will not carry out a new anti-terrorism operation, the sources said.

Emphasizing the importance of calm in the region, the US representative said that services should be provided to the people of the region.

In October 2014, an agreement was signed in Duhok between Kurdish groups during a meeting chaired by former KRG President Massoud Barzani. The deal stipulated the joint action of Kurdish political entities in northern Syria.

However, after the YPG/PKK invaded the northern part of Syria, they blocked the activities of the opposition ENKS members, seized arms of the group’s members and detained many of its political members. The terrorist organization also shut down the ENKS offices.

The terrorist group and ENKS decided to continue negotiations in al-Hasakah based on the Duhok agreement as a result of US pressure.

ENKS, which has been negotiating for about nine months, could not get what it wanted from the YPG/PKK, which did not fulfill the terms of the negotiations and still resists the entry of the Peshmerga affiliated to the ENKS into the region.

Within the scope of Jeffrey’s visit to the region, YPG/PKK terrorists and ENKS formed a decision-making committee. Half of the 40-person committee was determined by the YPG/PKK and the other half by ENKS.

Turkey: Unemployment rate down in Sept

COVID-19: Will ‘infodemic’ prevent Europeans from getting vaccinated?