TurkishPress
Home News US: Over 500,000 sign petition for KKK to be terror org 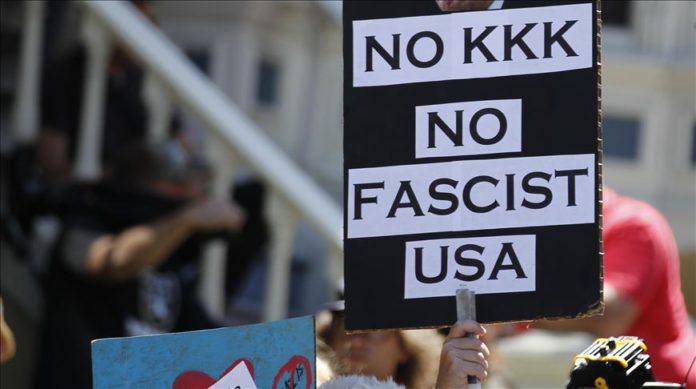 Over half a million people as of Wednesday have signed on to a growing petition calling on the Trump administration to label the Ku Klux Klan (KKK) a terrorist organization.

The Change.org petition has accrued over 565,000 signatures, with the tally continuing to rise.

“The KKK has raped, murdered people for registering to vote and destroyed towns built by African Americans,” it reads. “Black Americans have suffered the most under this terror group. Terrorism is the use of violence and intimidation in pursuit of political aims. We ask if ISIS or ISIL is labeled a terrorist group for their acts, then surely the KKK fit the clear description of a terrorist.”

It was referring to the internationally-designated terror group also known as Daesh.

A second Change.org petition also calling for the KKK to be designated has over 141,000 signatures.

The calls come after a prosecutor in Virginia said a man who drove his truck into a Black Lives Matter protest in Richmond over the weekend is an admitted KKK leader.

Still, it is unclear how the Trump administration could heed the petitions’ calls, assuming it is open to the possibility in the first place.

The federal government only has the authority to designate foreign groups as terrorist organizations as there is not a domestic terrorism statute under which to label US-based groups.

That question arose when President Donald Trump announced last week that he is seeking to label anti-fascist group Antifa as a terrorist organization after violence erupted at some mass protests against racial injustice, which Trump blames on the far-left group.