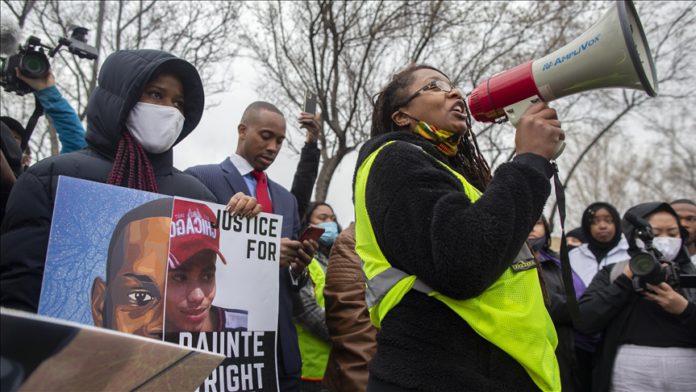 The suburban Minneapolis, Minnesota police officer who recently shot and killed a Black man was arrested and charged with second-degree manslaughter on Wednesday.

Kim Potter, a 26-year veteran of the Brooklyn Center police department, was booked into the Hennepin County jail.

It was the latest in a cascading number of events since Potter shot 20-year-old Daunte Wright during a routine, minor traffic stop on Sunday.

Potter said she meant to grab her taser when Wright resisted arrest. But instead, she grabbed her gun and shot Wright once in the chest.

A second-degree manslaughter charge indicates that a person killed someone without malice and without intending to do so. It carries a maximum punishment of 10 years in prison.

The attorney for Wright’s family, Benjamin Crump, released a statement saying, in part: “While we appreciate that the district attorney is pursuing justice for Daunte, no conviction can give the Wright family their loved one back. This was no accident. This was an intentional, deliberate, and unlawful use of force.” He added, that Wright was killed for “driving while Black” and that Potter “executed” him.

Crump also represents the family of George Floyd, a black man killed by then-Minneapolis police officer Derek Chauvin who is currently on trial.

The Chauvin trial is taking place 10 miles from the site of Wright’s shooting and is expected to head to the jury next week.

The “George Floyd effect” on the Wright case has been notable. Potter and the police chief of Brooklyn Center both resigned within 48 hours of his death, an unheard of development; the now-former police chief, Tim Gannon, released Potter’s body camera video of the shooting to the public less than 24 hours after Wright’s death, even against legal advice. Release of that kind of video often takes years and countless legal fights. Gannon said he wanted to be as transparent as possible.

And the case is being investigated not by officials in Hennepin County, where the shooting occurred, but in a neighboring county to avoid a conflict of interest.

That is a specific rule change that happened after Floyd’s death last year.