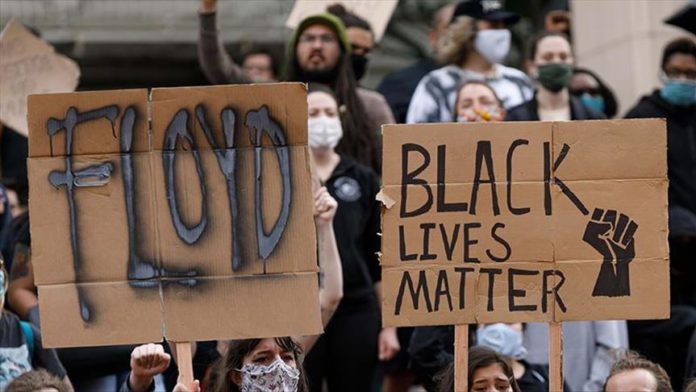 Some 4,000 people were arrested across the US, as protests continue over the death of George Floyd, an unarmed black man who died after being pinned down by a former white police officer, according to CNN’s tally.

It reported Monday that the first arrests began a day after Floyd’s death on Tuesday after thousands have flooded to streets of Minneapolis to demand an end to police brutality and to voice that “black lives matter”.

Despite curfews in major US cities, demonstrators took to the streets for the sixth day of protests Sunday, demanding the arrest of three other officers who were involved in Floyd’s death.

The death triggered both peaceful and violent demonstrations countrywide.

Cited by CNN, the New York Police Department arrested more than 200 protestors Sunday night, mainly in Manhattan and Brooklyn, while at least seven officers were injured.

Hundreds of them were also arrested in California’s Los Angeles and San Diego areas.

More than 60 US Secret Service Uniformed Division officers and special agents were injured between Friday night and Sunday morning as protests rocked Washington, DC, according to a statement by the service.

Meanwhile, a video circulating social media shows peaceful protesters handing a protester who tries to manipulate the protests with violence to the police.

In the video, a man can be seen tearing paving stones to throw at security forces, later with a group of peaceful protesters catching and leading him to the police for arrest.

The phrase became a rallying point for protesters demonstrating against the killings of unarmed black men and women by police. It continued to resonate even nearly six years later.