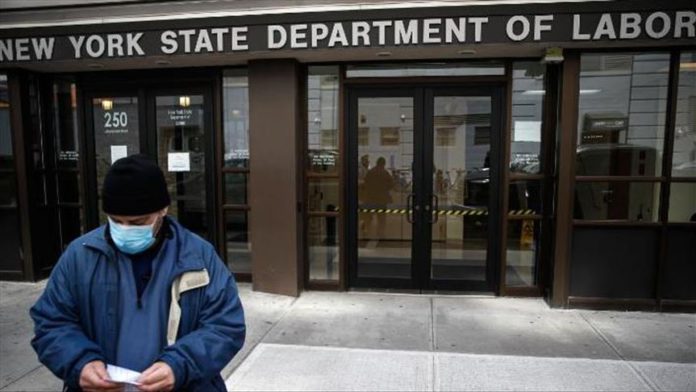 Nearly 3.2 million more Americans filed for unemployment benefits last week as the US continues to grapple with economic shockwaves from the novel coronavirus, according to data released Thursday by the Labor Department.

In all, some 3.17 million jobless claims were filed, representing a week-on-week fall of 677,000 claims – the lowest total since the week ending March 14. The seven-week total for those who have lost jobs during the pandemic now tops 33.5 million.

That means about all the jobs added to the US workforce since the 2008 great recession have now been lost in a little more than a month, according to multiple reports, highlighting the staggering economic toll of the virus.

Many businesses have been shuttered or have greatly reduced operations as many states enforce stay-at-home orders and have halted operations for all but essential businesses. Most school systems have similarly suspended operations.

Combined, the measures have sent tremors through the US economy, with the service industry and agriculture sector particularly hard-hit.

At least 73,431 people in the US have lost their lives to COVID-19 – the highest death toll in the world – the respiratory disease caused by the virus, according to data compiled by Johns Hopkins University.

The true death toll is likely higher, however, as jurisdictions continue to test bodies of the deceased for the virus, as in Santa Clara, California, where a recent discovery reset the record for the earliest-known death by weeks.

Many states are beginning the process of reopening, but while the virus has been waning in its original US epicenter of New York City, it has been growing in other areas of the country, and fears have mounted that the reopening long sought by President Donald Trump could lead to a resurgence.