TurkishPress
Home Americas US & Canada US: Miami 'will not tolerate' violence on Election Day 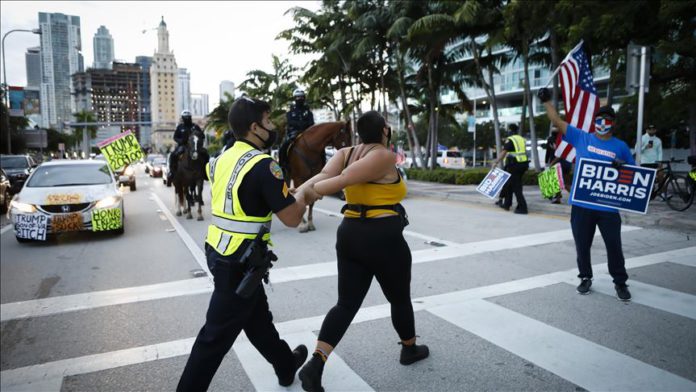 Miami, Florida Mayor Francis Suarez said the city will not tolerate any acts of violence on Election Day.

“The City of Miami fully intends to preserve your right to vote safely and we will not tolerate any acts of violence,” Suarez said on Twitter. “We have increased officer presence throughout the City and plain-clothed officers will be stationed at polling places to guarantee a welcoming environment.”

Meanwhile, Florida’s Secretary of State Laurel Lee, cited by CNN, said that no security issues have been reported during the voting process in the key swing state so far.

Lee said in a press conference that there may be isolated precincts in Lake and Lee counties that had “some technology challenges this morning,” adding these issues will not prevent any voters from casting ballots.

She also added that the state’s databases “are secure” and National Guard has been mobilized “out of an abundance of caution”.

In the 2016 elections, President Donald Trump won Florida by receiving 49% of votes by a margin of 1.2%. Polls indicate a tight race in the Sunshine State between Trump and Democratic nominee Joe Biden.

“Out of an abundance of caution, the Florida National Guard is activating a number of Soldiers who will be pre-positioned in several locations across the state, standing by to assist local law enforcement and their communities as needed,” Florida National Guard spokeswoman Lt. Col. Caitlin Brown said in a statement.

US to pass 10M coronavirus tests this week: Trump