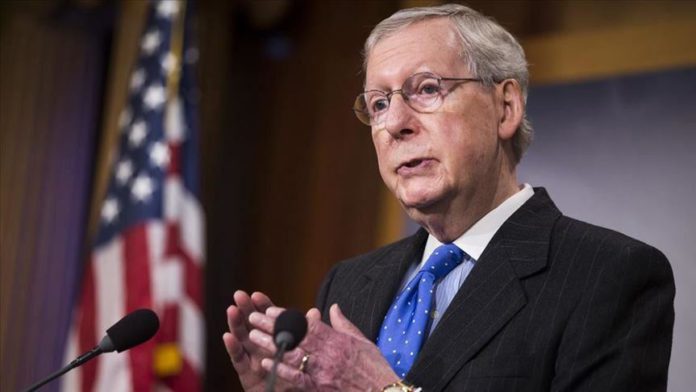 Senate Majority Leader Mitch McConnell promised Thursday there would be an “orderly transition” of power following the Nov. 3 presidential election after US President Donald Trump again declined to commit.

“The winner of the November 3rd election will be inaugurated on January 20th,” McConnell said on Twitter amid continued uproar about the president’s comments Wednesday. “There will be an orderly transition just as there has been every four years since 1792.”

McConnell did not explicitly name Trump, but it is a clear response to the president’s comments when he again declined to commit to a peaceful transition after the election if he loses to Democratic nominee Joe Biden.

“Well, we’re going to have to see what happens. You know that. I’ve been complaining very strongly about the ballots,” Trump said in response to a question, again questioning the integrity of mailed-in ballots. “We want to have — get rid of the ballots and you’ll have a very trans- — we’ll have a very peaceful — there won’t be a transfer, frankly; there’ll be a continuation.”

Trump is currently trailing Biden by a seven-point margin nationally, and is behind the former vice president in every major battleground state, according to a composite of polling conducted by the Real Clear Politics website.

White House spokeswoman Kayleigh McEnany sought to walk back Trump’s comments Thursday, saying “the president will accept the results of a free and fair election.”

“But I think that your question is more fitting to be asked of Democrats,” she said.

House of Representatives Speaker Nancy Pelosi lambasted the president’s refusal to commit to a concession in the event that he loses. Trump is “trying to have the Constitution of the United States swallow Clorox,” she said in reference to his earlier comments on treatment for the coronavirus pandemic.

“What really matters in terms of the peaceful transfer of power is that people vote, and that their vote is counted as cast whoever they vote for, whatever the outcome,” the Democratic leader told a news conference. “If he honestly gets the majority of the Electoral College and is the next president that is the peaceful continuation of power.”