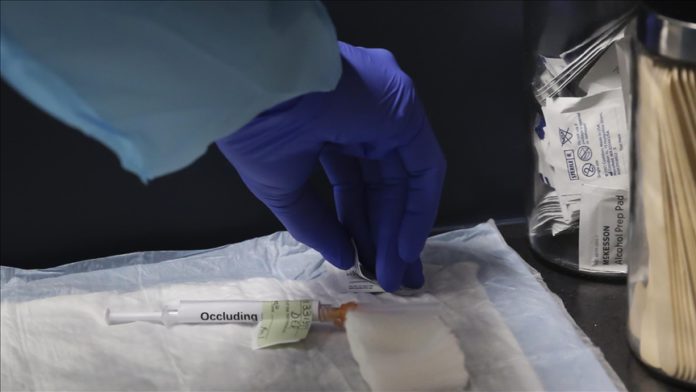 The US on Thursday marked the administration of 50 million COVID-19 shots since President Joe Biden took office.

The milestone comes as Biden seeks to fulfill his pledge to administer 100 million vaccines in his first 100 days in office, and having gotten halfway there in just 37 days, he is on pace to far exceed the goal.

Biden described his effort as being “weeks ahead of schedule” after recounting earlier skepticism that he would be unable to administer 100 million shots so early in his presidency.

“Even with the setbacks we’ve faced during the recent winter storms, which devastated millions of midwestern cities, towns, and also the same in the south,” he said at the Eisenhower Executive Office Building. “We’re moving in the right direction despite the mess we inherited from the previous administration, which left us with no real plan to vaccinate all Americans.”

The Biden administration maintains that when it came to office on Jan. 20, the vaccine push was in a dire state with a deluge of logistical difficulties to overcome, including a lack of people to physically administer the shots.

Both of the vaccines being administered in the US — one from Pfizer-BioNTech and another from Moderna — require two separate shots spaced weeks apart. They rely on a novel method to combat the coronavirus, using what is known as messenger RNA, or mRNA.

In all, 66,464,947 shots have actually gone into people’s arms since the vaccines were granted emergency use authorization in mid-December, according to data from the Centers for Disease Control and Prevention. Nearly 89 million doses have been distributed.

Early on in the vaccine rollout, logistical difficulties led to doses going to waste as they require extreme refrigeration to remain viable. Other problems have included getting vaccinated individuals their second shot while bringing in new people to get their first dose.