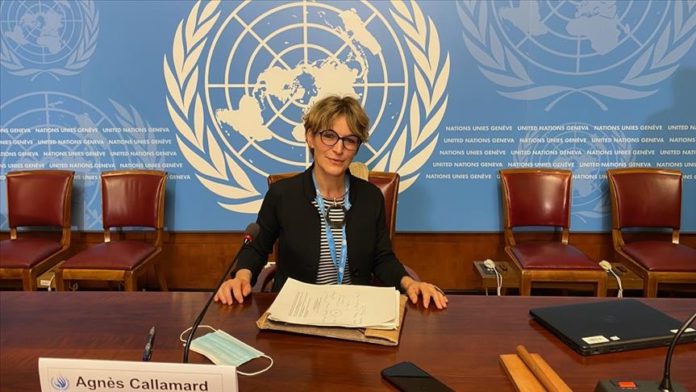 UN special investigator Agnes Callamard said Monday it is “dangerous” and “problematic” for a US intelligence report about the murder of Jamal Khashoggi to formally blame the Saudi crown prince for the killing but to suggest no punishment.

Speaking at a hybrid UN press conference in Geneva, Callamard welcomed last week’s report naming Mohammed bin Salman as being behind the October 2018 operation in Istanbul that killed Khashoggi.

It “is an important demonstration as well on the part of the United States to be transparent,” she said in answer to a question.

Still, Callamard criticized how so far, the US government failed to build on their findings of liability and responsibility on bin Salman’s part, describing it as “worrisome.”

“It is extremely problematic, if not dangerous, to acknowledge someone’s culpability, and then to tell that someone, we won’t do anything; please proceed as if we had said nothing,” said Callamard.

Khan supported Callamard and said she was pleased the report had been published but “very disappointed” that the US has not yet taken more decisive action on accountability.

At the press conference, she added: “You probably know that only 12% of killings of journalists ever get investigated and prosecuted. So that is an appalling number around the world. And the US should take the lead in pushing for accountability.”