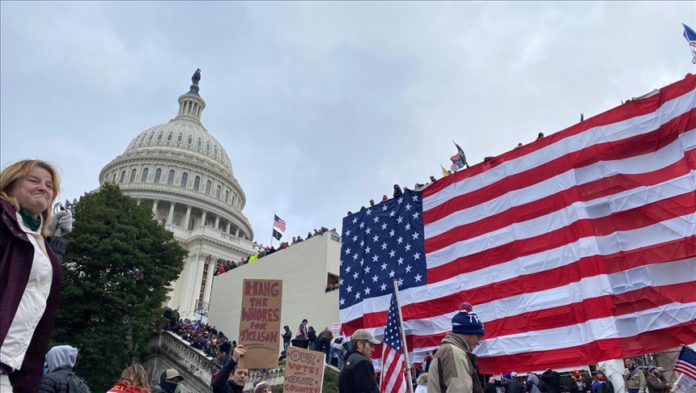 Democratic and Republican lawmakers in the US condemned the storming of the Capitol building by supporters of Donald Trump, blaming the outgoing president for inciting a “coup” and dubbing the incident an “act of terrorism”.

“The attack at the Capitol was a despicable act of terrorism and a shocking assault on our democratic system,” Republican Senator Ted Cruz from Texas said in a statement, as he urged the Justice Department to prosecute those involved in “these brazen acts of violence”.

On Wednesday, Trump supporters clashed with police, protesting Congress’ certification of Joe Biden’s presidential victory, and later breached the Capitol building and made their way to the Senate floor, forcing lawmakers to evacuate the building.

Republican Senator Mitt Romney from Utah called the riots a result of “a selfish man’s injured pride and the outrage of his supporters” and said Trump “has deliberately misinformed for the past two months and stirred to action this very morning.”

“What happened here today was an insurrection, incited by the President of the United States,” he said in a statement late Wednesday.

A Republican member of the House of Representatives from Illinois, Adam Kinzinger said: “As a student of foreign policy, if someone described to me the actions that we saw, I would’ve assumed we were in a failed state or a banana republic.”

After calling the riots a “coup attempt,” Kinzinger tweeted directly to Trump, asking: “You are not protecting the country. Where is the DC guard? You are done and your legacy will be a disaster.”

Republican Senator Ben Sasse from Nebraska said the Capitol “was ransacked while the leader of the free world cowered behind his keyboard — tweeting against his vice president for fulfilling the duties of his oath to the Constitution.”

“Lies have consequence. This violence was the inevitable and ugly outcome of the president’s addiction to constantly stoking division,” he added.

Former Republican Congressman Will Hurd from Texas, who retired last year, called the riots an act of “domestic terrorism”.

“This should be treated as a coup led by a president that will not be peacefully removed from power,” he wrote on Twitter.

Some lawmakers were trapped inside Capitol Hill when Trump supporters stormed in, and they took their frustration to Twitter before evacuating the building.

“This is thuggery at its best … the flames are being stoked by the person currently in our #WhiteHouse. Donald Trump is responsible for this. #TrumpThugs,” Democratic Representative Adriano Espaillat from New York wrote on Twitter.

Democratic Senator Cory Booker from New Jersey reminded how the British stormed the Capitol on Aug. 24, 1814 and set it on fire.

“Now the Capitol has again been breached and sieged. Donald Trump incited this. He is responsible for this. And he is silent as this tragic moment continues,” he said.

Senator Tom Cotton from Arkansas urged Trump to quit misleading American people and accept the result of 2020 US presidential election after riots in Capitol Hill.

“No quarter for insurrectionists. Those who attacked the Capitol today should face the full extent of federal law,” Cotton said in a statement on Wednesday night.

Top Republican lawmaker Mitch McConnell, who will soon become the upper chamber’s minority leader after Republicans lost Wednesday two seats in the runoff elections for the Senate in the state of Georgia, said: “The Senate will not be intimidated.”

“President Trump claims this election was stolen … But over and over, the courts rejected these claims — including all-star judges whom the President himself nominated,” McConnell said after the Congress reconvened Wednesday evening to count Electoral College votes.

McConnell earlier said: “The Constitution gives Congress a limited role. We cannot simply declare ourselves a national Board of Elections on steroids,” adding if the Congress would overrule voters, courts, and states, this would damage the US forever.

When the Congress reconvened hours later the riot, lawmakers certified the Electoral College votes, which officially made President-elect Joe Biden the 46th president of the US.