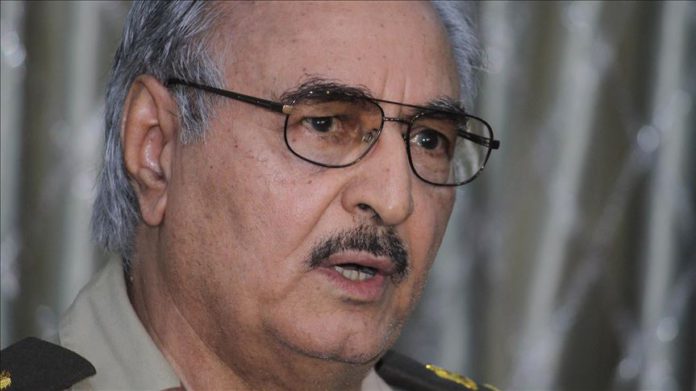 A US District Court judge on Tuesday largely rejected renegade Libyan General Khalifa Haftar’s effort to dismiss a pair of lawsuits against him brought by plaintiffs who say he is responsible for the deaths of their family members.

Haftar has argued that the cases against him should be dismissed because he is immune from legal action under his claim of being Libya’s head of state.

He is the head of eastern Libya’s Libyan National Army (LNA), which is locked in a power struggle with the internationally-recognized Government of National Accord (GNA) based in the capital, Tripoli.

Faisal Gill, a lawyer representing the families, said in an interview with Anadolu Agency following Tuesday’s virtual hearing that Judge Leonie Brinkema has largely rejected the state immunity claim but allowed 60 days for the State Department to formally weigh in on the matter. It is unclear if it will.

Should the State Department not respond, the case will proceed to what is known as discovery, when each side can request documents and ask questions from the other.

Asked in August whether the Trump administration views Haftar in any way as Libya’s head of state, a State Department spokeswoman who spoke on condition of anonymity told Anadolu Agency “there has been no change to the U.S. position with regard to recognition of the Libyan Government of National Accord.”

“The Libyan Political Agreement and its associated institutions, including the GNA, are the sole internationally recognized framework for Libya’s governance and political transition, as affirmed by the UN Security Council,” she said.

Haftar’s legal team additionally argues that the plaintiffs are presenting a “political question” ill-suited to be resolved by the courts and that their clients — Haftar and his two sons — were not properly served notice of the lawsuit.

That argument was also rejected by Brinkema, the presiding judge, Gill said.

Two lawsuits that have been filed in a US court in the state of Virginia by victims’ families accuse Haftar of being responsible for gross human rights abuses, including extrajudicial killings and torture committed by his forces during the course of Libya’s civil war.

They seek millions of dollars in compensation that can be accrued from property owned by Haftar, a dual US-Libyan national who had lived with his sons Khalid and Saddam for years in Virginia after a falling out with Libya’s deceased former strongman Muammar Gaddafi.

While the judge heard Haftar’s motion to dismiss both cases during a single session, they are currently being considered separate cases.