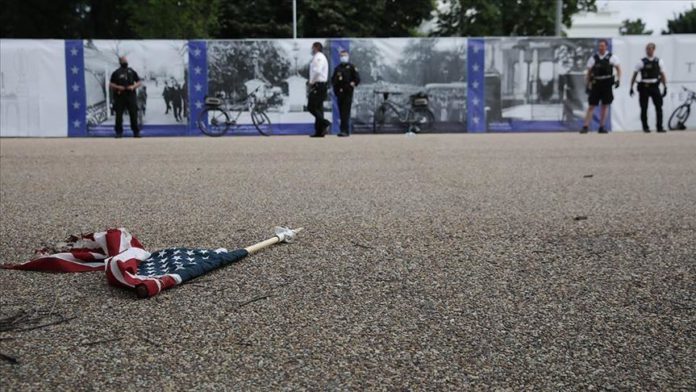 Hundreds of demonstrators gathered at Lafayette Park across from the White House to protest the death of George Floyd, an unarmed black man who died after being pinned down by a white police officer.

Protestors chanted, “No Justice, No Piece” and “I can’t breathe” during demonstrations that drew people from all walks of life to the nation’s capital.

A group of protestors surrounded a police vehicle and others beached the first security barricade at the park.

A black protestor yelled at a black police officer behind the barricade: “The white police next to you don’t care about you. You are like me.” The officer did not respond.

Demonstrators attempted to breach a second barrier and hurled water bottles at police but were pushed back by officers who used batons.

But police claimed he resisted arrest. An officer had kneeled on his neck despite Floyd’s repeated pleas of “I can’t breathe.”

Mayor Jacob Frey fired Chauvin and three other officers who were at the scene when Floyd was arrested.

The county’s top prosecutor charged Chauvin with third-degree murder and manslaughter on Friday.