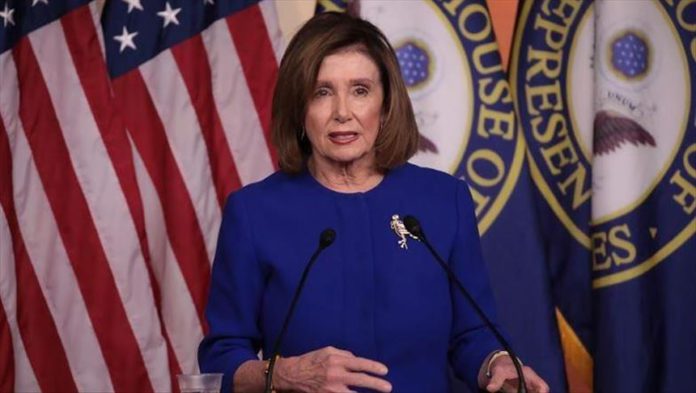 US House of Representatives Speaker Nancy Pelosi is drawing criticism Wednesday after she visited a California hair salon despite a ban on indoor personal services in the city of San Francisco.

Footage released by Fox News shows Pelosi walking between rooms at the salon with wet hair, without wearing a mask. She is followed by a masked man.

The video dealt a blow to the high-ranking Democrat who has persistently called for a nationwide mask mandate.

Pelosi’s office said she always uses a mask and abides by coronavirus requirements.

“This business offered for the Speaker to come in on Monday and told her they were allowed by the city to have one customer at a time in the business. The Speaker complied with the rules as presented to her by this establishment,” it said.

Salon owner Erica Kious told Fox News that it was a “slap in the face” that the California Democrat went to the establishment while no one else can go in because salons are shuttered in the city due to the pandemic.

US President Donald Trump was quick to pounce.

“Crazy Nancy Pelosi is being decimated for having a beauty parlor opened, when all others are closed, and for not wearing a Mask – despite constantly lecturing everyone else.”

“We will almost certainly take back the House, and send Nancy packing!” he wrote on Twitter.

As expected, Senate Republicans lambasted Pelosi for pushing “policies that would keep our economy closed and our small businesses shut down.”

“But for herself? A salon visit whenever she pleases. A ‘slap in the face’ indeed,” the group wrote on Twitter.

The virus has sent businesses nationwide into a crisis since March, with nearly 185,000 deaths and more than 6 million sickened since it was detected in the Chinese city of Wuhan in December.