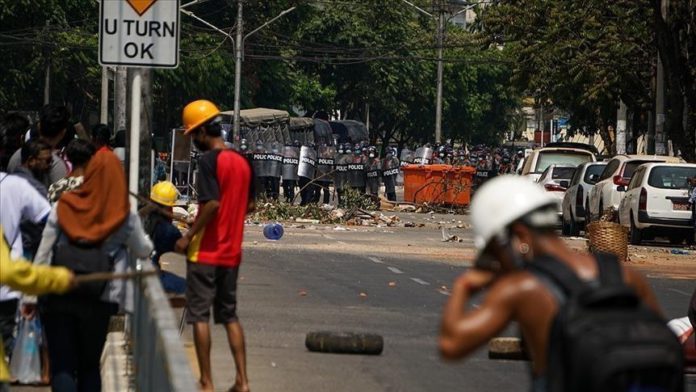 The US suspended all trade engagement with Myanmar on Monday after the military’s ongoing crackdown on pro-democracy demonstrators hit its bloodiest peak over the weekend.

US Trade Representative Katherine Tai said the decision to halt the 2013 Trade and Investment Framework Agreement is effective immediately, and will remain in place “until the return of a democratically elected government.”

“The United States supports the people of Burma in their efforts to restore a democratically elected government, which has been the foundation of Burma’s economic growth and reform,” Tai said in a statement using the US government’s preferred name for Myanmar.

“The killing of peaceful protestors, students, workers, labor leaders, medics, and children has shocked the conscience of the international community. These actions are a direct assault on the country’s transition to democracy and the efforts of the Burmese people to achieve a peaceful and prosperous future,” she added.

At least 141 people, including children, were shot dead by Myanmar’s ruling military regime on Saturday in a violent crackdown pro-democracy protests that erupted after the junta’s Feb. 1 seizure of power. The mass killings marked the country’s bloodiest since the coup took place.

As many as 459 people have been killed amid the junta’s attempts to quell dissent, according to the Assistance Association for Political Prisoners rights group.

Last month, Myanmar’s military ousted the elected government of Aung San Suu Kyi after her NLD made sweeping gains in nationwide elections in November. In response to the coup, civilian groups across the country launched a civil disobedience campaign that has included mass demonstrations and sit-ins.