TurkishPress
Home Americas US & Canada US governor: 'Protests no longer about' George Floyd 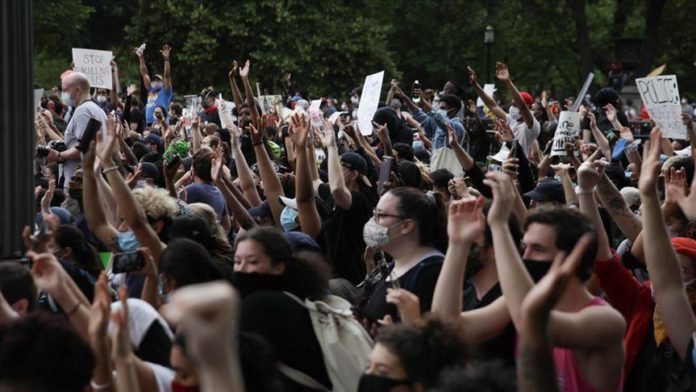 Governor of the US state of Minnesota Tim Walz said Saturday that ongoing protests in Minneapolis city were “no longer” about the death of George Floyd, an unarmed black man who recently died after being pinned down by a police officer.

“It is about attacking civil society, instilling fear and disrupting our great cities,” said Walz at a press briefing, adding that he was authorizing the “full mobilization” of the state’s National Guard.

Walz called the move “an action that has never been taken in the 164-year history of the Minnesota National Guard.”

His decision came a day after protestors ignored a mandatory curfew in the cities of Minneapolis and St. Paul, clashing with police and burning down private properties.

Protests also erupted in other parts of the country including California, Georgia, New York, Texas and Massachusetts, among others.

President Donald Trump blamed Antifa and radical left groups for violent demonstrations, saying the military was ready to respond to the protests.

“These people this Antifa, it’s a lot of radical left bad people, and they’ve got to be taught that you can’t do this.”

On Twitter, Trump later said that 80% of the “rioters” in Minneapolis on Friday night were from “out of state.”

“They are harming businesses (especially African American small businesses), homes, and the community of good, hardworking Minneapolis residents who want peace, equality, and to provide for their families,” he tweeted.

Separately, the mayors of Minneapolis and St. Paul told reporters that most of the violent protesters were not residents of the cities.

“We’ve seen community institutions set on fire. And I want to be very, very clear. The people that are doing this are not Minneapolis residents,” Mayor Jacob Frey told a press briefing Saturday.

But police claimed he resisted arrest. An officer had kneeled on his neck despite Floyd’s repeated pleas of “I can’t breathe.”