TurkishPress
Home Americas US & Canada US: Ginsburg 1st woman to lie in state at Capitol 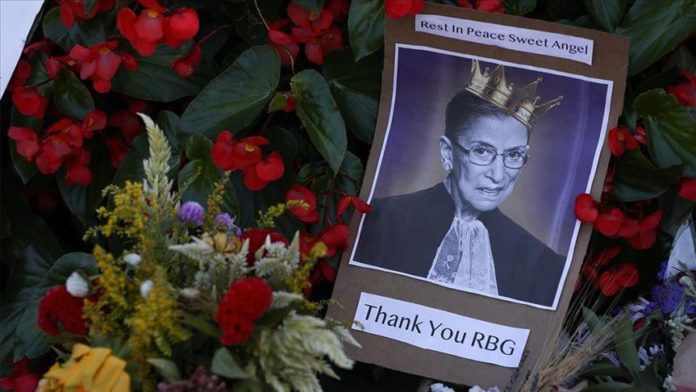 Late Supreme Court Justice Ruth Bader Ginsburg became the first woman, and first person of Jewish ancestry, to lie in state at the US Capitol Friday as mourners commemorated her judicial legacy.

Ginsburg’s flag-draped coffin arrived at the Capitol in a Hearse early Friday morning before being ceremoniously marched by US service members to the Statuary Hall where guests were able to pay their respects to the former leader of the top court’s liberal wing during a socially-distanced gathering.

“Today we stand in sorrow and tomorrow we the people must carry on Justice Ginsburg’s legacy,” Rabbi Lauren Holtzblatt of the Adas Israel Congregation said, addressing attendees. “Even as our hearts are breaking we must rise with her strength and move forward. She was our prophet, our north star, our strength for so very long. Now she must be permitted to rest after toiling so hard for every single one of us.”

Democratic presidential nominee and former Vice President Joe Biden and his wife Jill Biden were among those who attended the solemn commemoration.

Democrats are pushing to ensure the former leader of the liberal wing of the Supreme Court is not replaced by another conservative nominated by US President Donald Trump. But, for now, they do not appear to have the necessary support from Republicans to stop a confirmation.

Trump will announce his nominee on Saturday evening, setting in motion what will be a bitterly contested confirmation battle that the president wants to see concluded before the Nov. 3 election.

Even though Senate Majority Leader Mitch McConnell said in 2016 that Supreme Court vacancies should not be filled during an election year — a bid then to prevent former President Barack Obama from appointing a replacement for conservative justice Antonio Scalia who died in February of that year — he has since reneged on the statement.

Obama formally nominated Circuit Court Judge Merrick Garland to replace Scalia in March of that year, but McConnell said it would be inappropriate to confirm him while the American people were about to vote on the president’s successor.

The Senate majority leader has since gone back on those comments, and vowed to push through a Trump nominee.

So far, senators Susan Collins and Lisa Murkowski are the only Republicans to have broken ranks with their party, agreeing with Democrats that a nominee should not receive a vote until a president is elected in November.

Democrats would need to have two more Republican senators announce opposition if they are to successfully thwart a Trump nominee in the 100-seat Senate, which has a 53-47 Republican advantage.

ANALYSIS – The American COVID-19 crisis: A disaster decades in the...