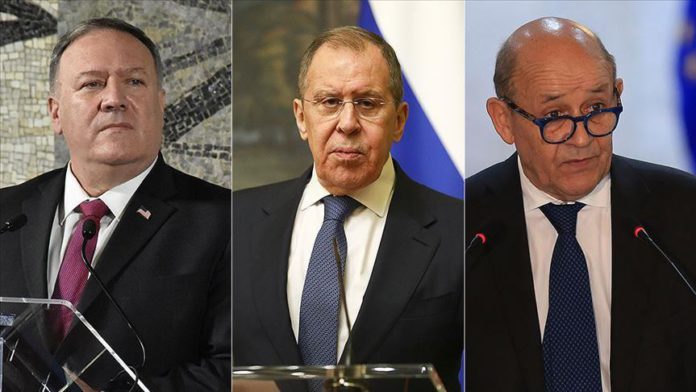 The foreign ministers of the US, France and Russia condemned Monday the “unprecedented and dangerous escalation of violence” between Armenia and Azerbaijan, calling for the parties to institute a ceasefire.

In a joint statement the top officials stressed “unconditionally that recent attacks allegedly targeting civilian centers – both along the Line of Contact and on the territories of Azerbaijan and Armenia outside the Nagorno-Karabakh conflict zone – and the disproportionate nature of such attacks constitute an unacceptable threat to the stability of the region.”

“The Ministers call once again upon the conflicting parties to accept an immediate and unconditional ceasefire,” the ministers of what is called the OSCE Minsk Group said.

“The Co-Chairing countries are determined to exercise fully their mandate, entrusted to them by the OSCE and the international community, with the contribution of the Minsk Group capitals. As such, they will firmly continue to advance their engagement with the sides, and urge them to commit now to resuming the settlement process on the basis of existing core principles and relevant international documents well-known by both parties,” the added.

Fighting between Armenia and Azerbaijan over Nagorno-Karabakh began Sept. 27.

Relations between the two former Soviet republics have been tense since 1991, when the Armenian military occupied the region, an internationally recognized territory of Azerbaijan.

France, Russia and NATO, among others, have called for an immediate halt to the ongoing clashes in the occupied region.