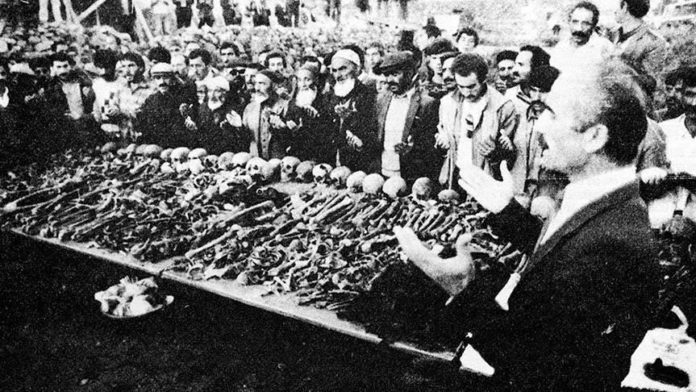 An academic in the US argued on Thursday that there is “no document proving that the killing of Armenians was an official policy” of the Ottoman Empire in 1915.

Having conducted research on the events of 1915, Gunter said Armenian claims had a greater audience because Christian Armenians had gained more sympathy in the Christian West.

“Also, Muslim Turks were historical enemies of the West. Since Armenians also spoke Western languages better than Turks, they were able to convey their messages to the West better,” explained Gunter, a professor of sociology and political science.

Emphasizing that he hoped an academic dialogue would be initiated between the advocates of Turkish and Armenian theses in the US, Gunter pointed out that Turkish-Americans would be willing to do so, but Armenian-Americans had never accepted such an endeavor.

He stressed that many Armenians in the western parts of the Ottoman Empire had not been deported, adding that some Armenians had been killing innocent Muslims for decades without interruption.

“For genocide to exist legally in international law, planning or premeditation must be proven, and it has not been proven on this issue,” he said.

Turkish stance on the 1915 events

Turkey’s position on the events of 1915 is that the deaths of Armenians in eastern Anatolia took place when some of them sided with the invading Russians and revolted against the Ottoman forces. A subsequent relocation of Armenians resulted in numerous casualties.

Turkey objects to the presentation of these incidents as “genocide”, describing them as a tragedy in which both sides suffered casualties.