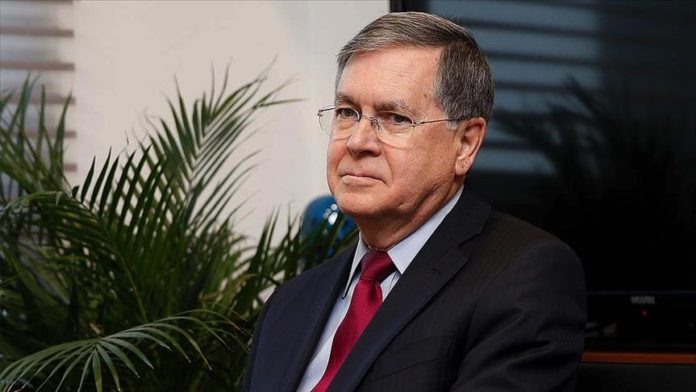 The US ambassador to Turkey said the US continues its commitment to the long-standing and successful business relationship with Turkey, and is keen to strengthen existing commercial ties.

In a written statement, US Ambassador to Turkey David Satterfield responded to Anadolu Agency’s questions about the Turkey-US economic ties.

Stressing that trade relations between the two countries are strong and span a number of different sectors, Satterfield said that many well-known American companies have production facilities in Turkey.

Satterfield said these companies export from Turkey into Europe, Eurasia, and the Middle East, and added that more than 1,700 US companies are active in Turkey, employing 78,000 Turkish workers with assets totaling $31.2 billion.

‘US committed to our longstanding and successful commercial ties with Turkey’

“The United States is committed to our longstanding and successful commercial ties with Turkey, something that countless US and Turkish partners have enjoyed for decades,” the US envoy said.

American and Turkish businesses work together every day, supporting jobs in both countries, Satterfield noted, and underlined that the business ties between the two countries have transcended the ups and downs of the geopolitical alliance, and they are instrumental to the continued engagement with the Turkish government.

“Although we have strong trade ties already, the US government would like to continue to strengthen these ties and increase bilateral trade. Beyond the prosperity that bilateral trade supports in both countries, working together can help both countries to diversify supply chains — something the pandemic has highlighted once again as important,” the US envoy said.

‘We view Turkey as a production center’

Satterfield said that 2019 bilateral trade in goods was over $20 billion, and despite the significant impact that the COVID pandemic has had on global trade, total trade in 2020 is on pace to exceed that.

Highlighting that the split between exports and imports is nearly even at $10 billion, Satterfield said: “[These figures are] reflecting our diversified and balanced trading relationship.”

Recalling that prior to COVID-19, Turkey sold a minimal amount of non-surgical gowns to the United States, Satterfield said that since the start of the pandemic, Turkey has exported over $190 million in gowns to the US.

“It is a great example of how our two economies can work effectively together. And we are extremely grateful for it, as those gowns kept people safe and no doubt saved lives. As we seek to further diversify our medical supply chains, we view Turkey as a production center with a lot of potential,” he added.

“The most positive aspects of Turkey’s investment climate are its favorable demographics and prime geographical position, providing access to multiple regional markets,” he added.

Pointing that many US firms view the Turkish market with interest, Satterfield said: “But [they] are hesitant due to concerns about a perceived lack of transparent, predictable orthodox economic policies. The issue of medical debt, payments still owed to international medical device companies, also makes potential investors concerned.”

He added that Turkish companies are active in the United States.

‘Identified areas where we can make progress’

Underlining that Turkey and the US have identified areas where they can make progress, Satterfield said the two countries have started to work under this plan.

In October of 2020, the Ministry of Energy and Natural Resources hosted a US-Turkey virtual conference on liquid natural gas [LNG], the US envoy added. “That’s good for US producers, who sell more LNG, and good for Turkish consumers, who benefit from cheaper imports.”

Satterfield said the US has also been working with Turkish furniture exporters, who despite the pandemic increased their sales to the United States. “There’s been a 77% increase in US imports of wooden furniture from Turkey so far this year.”

Underlining that progress has not advanced as fast as they hoped, and there is much work to do, Satterfield said: “We look forward to working on this over the coming year with Minister [of Trade Ruhsar] Pekcan and Minister [of Treasury and Finance Lutfi] Elvan.”

“There is no magic, immediate way to achieving better economic relations,” he said, and added: “The key to increased trade between the United States and Turkey is to work on the important bilateral economic issues already identified and to remove unnecessary roadblocks for US and Turkish companies as they arise.”

“While I think there are important ways our two governments can work together to make conditions for bilateral trade more favorable, ultimately, the real work in this arena will be done by American and Turkish businesspeople,” Satterfield also noted.

Referring to US investors’ decisions to invest in Turkey, Satterfield said: “If investors see stable monetary policy, prompt government debt payment, transparent tendering and an impartial judiciary they will flock to invest in the Turkish market.”