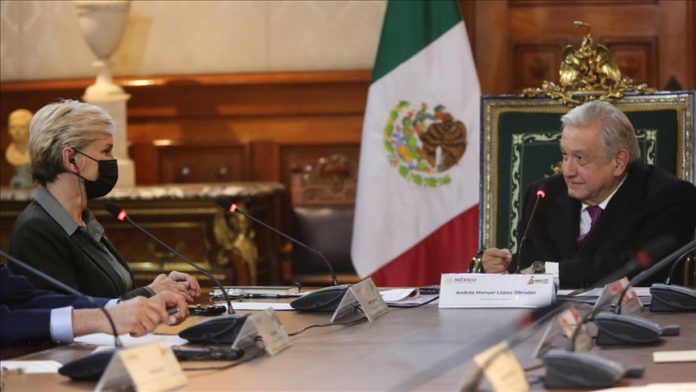 US Energy Secretary Jennifer Granholm concluded her visit to Mexico to discuss the government’s controversial energy reform on Friday.

“The United States greatly values our relationship with Mexico and sees tremendous promise for renewable energy to propel North American competitiveness,” Granholm said in a statement.

In each meeting, we expressly conveyed the Biden-Harris Administration’s real concerns with the potential negative impact of Mexico’s proposed energy reforms on U.S. private investment in Mexico. https://t.co/lkARtFrlsL pic.twitter.com/odT1Cf4ujR

It ignited debate inside and outside of Mexico and worried US investors and the American Congress about its southern neighbor’s reliance on non-renewable energy while incentivizing state-own companies above US capital.

Lopez Obrador has frequently said that Mexico’s energy market has been taken over by private investment with the help of corrupt government officials who have greatly benefited from privatizing the market.

The president’s reform proposal would change the Constitution in favor of Mexico’s Federal Commission of Energy above foreign investment, claiming it would achieve self-sufficiency.

Lopez Obrador said at a news conference Friday that he briefed Granholm on Mexico’s situation and where he stands regarding his government’s energetic policy.

“We informed her about the energy reform and what we are doing to straighten out wrongdoings, solving serious problems that we inherited, explaining how corruption prevailed in everything, that public finances were affected by private business and of course, it was affected to the people for the benefit of a minority,” he said.

Granholm’s statement said that Mexico is “blessed” with potential renewable energy that could power the country while considering US investment.

“We expressly conveyed the Biden-Harris Administration’s real concerns with the potential negative impact of Mexico’s proposed energy reforms on U.S. private investment in Mexico. The proposed reform could also hinder U.S.-Mexico joint efforts on clean energy and climate. We must maintain and enhance open and competitive energy markets that bring benefit to North America,” she said.

Granholm’s comments came after US Democratic legislators sent a letter to President Joe Biden expressing their disapproval for the proposed reform, claiming that if successful, it would compromise more than $40 billion for US companies.

Lopez Obrador explained that he would work to appease companies that oppose his reform and said both governments will revise all foreign companies requests on a “case by case” basis.