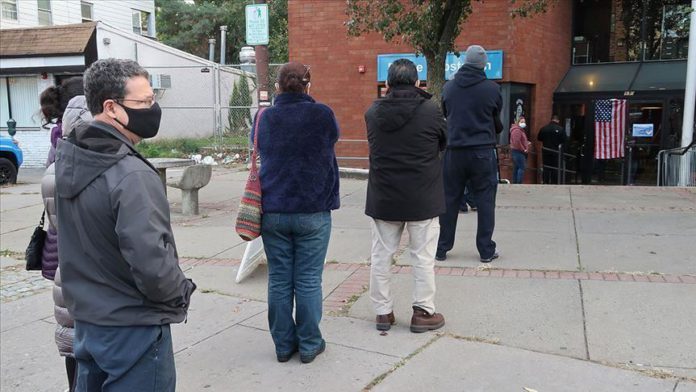 US election uncertainty continued Thursday without a clear winner in the 2020 presidential race, while the number of new daily American coronavirus cases surpassed 100,000 for the first time.

The US reported a record-high 102,831 infections Wednesday — an increase from the previous recorded of 91,530 Tuesday on Election Day.

The country still leads the world with almost 9.5 million cases and more than 233,000 deaths, according to data from Johns Hopkins University.

Globally, there is an excess of 48.2 million infections Thursday and more than 1.2 million deaths.

There is still not a clear winner in the election, although Democratic challenger Joe Biden is leading incumbent Republican President Donald Trump.

Biden managed to flip three states Trump won in 2016 — Michigan, Wisconsin and Arizona, winning 37 electoral votes in the race to 270. The former vice president now has 264 electoral votes to Trump’s 214.

Biden is also ahead six electoral votes in the state of Nevada by 8,000 votes, with 75% of counting reported, according to The Associated Press.

Trump leads in the key states of Georgia, North Carolina, Pennsylvania and Alaska — and is close to collecting 54 electoral votes but even if he wins those states and everything remains the same, it would make him shy two electoral votes of 270.

After falling behind Biden on Wednesday, Trump vowed to have a recount in Wisconsin and filed lawsuits to stop vote counting in Michigan and Pennsylvania, alleging irregularities and ”fraud.”

Despite potential lawsuits and recounts in coming weeks, investors were optimistic about a Biden win with stock futures up.

The Dow Jones and S&P 500 futures were up 1.3% and 1.8%, respectively. Nasdaq futures jumped 2.6% as the three major indexes pointed to a strong rally Thursday.