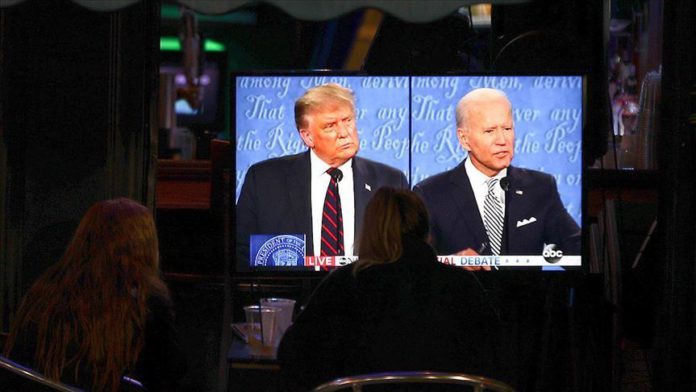 Seven US states hang in the balance early Wednesday in the 2020 polls to decide who will win the presidential crown between Republican President Donald Trump and his opponent, Democrat Joe Biden.

In Pennsylvania, a major swing state, Trump leads Biden 55.7% to 43.1% with more than 75.2% of the popular vote reported so far for the state’s 20 electoral votes, according to RealClearPolitics, a US news site and polling aggregator.

However, poll analysts say most of the early and mail-in ballots in the state have yet to be counted, and they are expected to shrink the gap in favor of Biden.

Trump early Wednesday demanded that all vote counting be halted, claiming victory in the face of “major fraud,” but Democrats say it is the standard legal practice in Pennsylvania and other states to continue counting for days afterwards.

In Michigan, another key state, Trump is ahead 51.5% against 46.9% for Biden, with 78.9% of the popular vote reported for the state’s 16 electoral votes. Similar concerns apply over mail-in and early votes, however.

The president also looks certain to claim victory in North Carolina, boasting 50.1% of the popular vote against Biden’s 48.7%, as RealClearPolitics data shows all votes have been counted for the state, which has 15 electoral votes.

In the Western state of Nevada, for six electoral votes, Biden was again ahead of Trump by 50% against 47.9%, although only 69.9% of the votes have so far been reported.

In the confirmed column, according to The Associated Press, Trump has captured the swing state of Florida along with most of the South and the country’s West and Midwest, including South Carolina, West Virginia, Kentucky, Indiana, Tennessee, Alabama, Mississippi, Arkansas, Louisiana, Missouri, Oklahoma, Ohio, Texas, Iowa, Kansas, Nebraska, North and South Dakota, Wyoming, Montana, Idaho, and Utah.

So far, Biden leads with 238 electoral votes to Trump’s 213 in the race to reach 270, the number of votes needed to win.