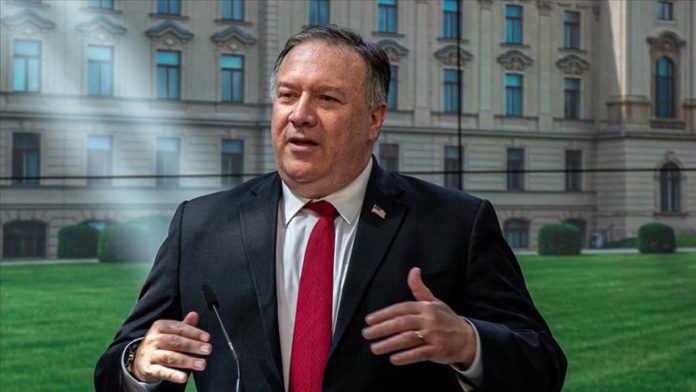 After 19 years of American invasion in the name of fighting terrorist groups and democratizing Afghanistan, which led to the shattering of latter’s political institutions, the US on Saturday announced that it is no longer interested in exporting democracy to the war-weary country.

US Secretary of State Mike Pompeo’s remarks came in the beginning of intra-Afghan peace talks between the Afghan government and Taliban insurgents in the Qatari capital Doha.

The historic talks aim to end nearly two decades of armed insurgency in Afghanistan amid pressure from US President Donald Trump’s administration ahead of elections on Nov. 3.

Trump in July authorized the shutdown of five military bases in Afghanistan as part of an agreement signed with the Taliban on Feb. 29. The US-Taliban agreement stipulates that the Taliban end any support to al-Qaeda, Daesh/ISIS or any other terror group to operate in areas they control, in return for complete withdrawal of US military and its allies from Afghanistan.

After thanking Qatari officials for their efforts to host the peace talks, Pompeo told the audience “Look, the choice of your political system is of course yours to make” during the opening remarks of historic Intra-Afghan peace talks.

On a side note, the US administration in June 2017 announced Qatar as one of the ”funders of terrorism” during the Saudi Arabia-led boycott of the peaceful Gulf country. However, the same US administration in an unexpected turn of events praised Qatar’s efforts to combat terrorism less than a year after in April 2018.

Pompeo in his tense speech to the negotiating Afghan parties said democracy has worked best for the US and many other nations but then acknowledged that “no one size fits all.”

“United States doesn’t seek to impose its system on others,” he added, stressing that his country “can only urge” it.

“You will write the next chapter in Afghan history,” he said, looking at the negotiating Taliban and Afghan government teams on both sides of the table.

The top US diplomat went on to say that his country is a “proponent of a sovereign, unified, and representative Afghanistan that is at peace with itself and with its neighbors.”

Pompeo also said that the scope and size of future US assistance to Afghanistan is conditional to the “choices and conduct” of the Afghan officials from today forward.

He said the warring sides must put an end to the perennial conflict for the sake of “not only for this generation of Afghans but for future generations as well, your children and your grandchildren.”

“So I cannot strongly enough urge you: Seize this opportunity. Protect this process. Respect each other. Be patient.”

“The Afghan people yearn for peace and have never been this close to ending 40 years of war,” Pompeo said on Twitter, affirming once again that it has to be an “Afghan-led” process.

US devastation of Afghanistan

During the war in Afghanistan launched by the US under “Operation Enduring Freedom,” in 2001 in the aftermath of 9/11 terrorist attacks in US soil, over 31,000 Afghan civilian deaths due to war-related violence have been documented and 29,900 civilians have been wounded.

More than 111,000 Afghans, including civilians, security forces and militants, are believed to have been killed in the conflict. According to the Cost of War project, the number of people who have died through causes related to the war may be as high as 360,000.

Afghans and the international community have long been protesting civilian deaths, as well as the war in Afghanistan waged in the name of global war on terror.