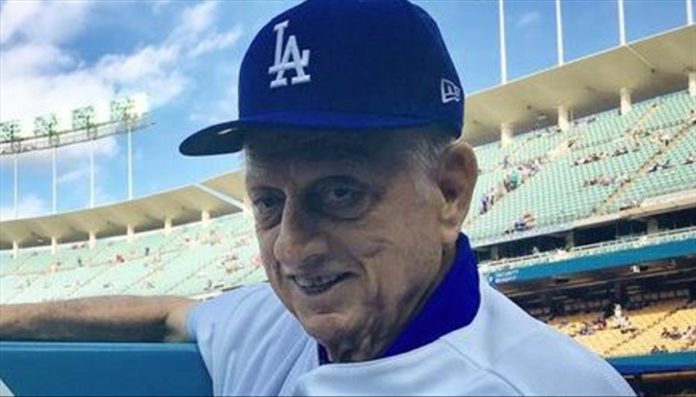 Tommy Lasorda, the man who for generations of adoring fans was a walking symbol of the Los Angeles Dodgers, has died at 93, the team announced Friday.

Lasorda suffered cardiac arrest at his home Thursday night before being transported to a nearby hospital where he was pronounced dead less than an hour later, the Dodgers said in a statement.

“Regarded by many as baseball’s most popular ambassador, Lasorda spent 71 seasons in the Dodger organization with Dodger Blue running through his veins,” the team said. “Lasorda’s wish to see another Dodgers World Championship was fulfilled last October when he traveled to Arlington, Texas to witness the Dodgers 3-1 victory over the Tampa Bay Rays in Game 6 of the World Series.”

That was the first Dodger World Series title since 1988, when Lasorda helmed the team.

He led the Dodgers on the field as manager for two decades beginning in 1976, winning two World Series in that time. He won Manager of the Year twice, and managed the Dodgers to 1,599 wins.

His number 2 has been retired by the Dodger organization.

Major League baseball Commissioner Rob Manfred hailed Lasorda as “one of the finest managers our game has ever known.”

Lasorda’s iconic moments are legion, but one that continues to resonate among fans is his 1988 trouncing of the Phillies Phanatic. The Phanatic, a costumed mascot known for his trolling before that word would gain widespread understanding, took to the field in Philadelphia, holding an effigy of the Dodger manager while taunting him with it.

Not one to ever take jabs lying down, Lasorda walked over to the Phanatic as it walked backwards, past an all-terrain vehicle the mascot rode in on for his ill-fated stunt. Lasorda took hold of the vehicle, and started to move away, prompting the Phanatic to change course as he walked toward the Dodger manager, exaggerating his frilly green stomach while swaying wildly.

He would soon regret the taunt. As he attempted to get to the ATV, Lasorda turned around and rushed the Phanatic, tackling him to the ground before hitting him with the effigy and walking off the field with it in tow.