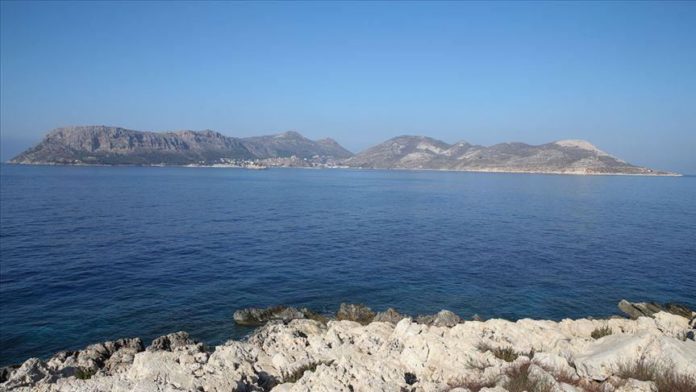 The US’ top diplomat for Europe on Saturday praised a recent decision to restart dialogue between Turkey and Greece amid high tension in the Eastern Mediterranean over the issue of energy exploration.

“We see some positive momentum on the Eastern Med, Turkey is taking the right steps towards moving back to exploratory talks with Greece,” Philip T. Reeker, the acting assistant secretary of state in the Bureau of European and Eurasian Affairs, told Anadolu Agency.

“There is an opportunity to decrease tension, to lower the risks, and do that by sitting down together,” said Reeker, who took up his post in March 2019.

Reeker arrived in Turkey this weekend for talks with his Turkish counterparts to discuss a wide range of issues, including the tension in the Eastern Mediterranean.

His comments came after Turkey and Greece on Thursday reached a “common understanding on general principles” on the Eastern Med in meetings at NATO headquarters in Brussels.

NATO Secretary-General Jens Stoltenberg is set to pay visits to Turkey and Greece next week for talks with senior officials, the military alliance announced Friday.

On Saturday, Reeker met with Turkish presidential spokesman Ibrahim Kalin and is expected to meet with other Turkish officials on Monday.

“The United States and Turkey have a long and strong history as NATO allies, as vital security partners,” Reeker said.

“So he asked me to come here since he was unable to come to Turkey,” Reeker added.

“Certainly we will have an opportunity to review the secretary’s recent travel as well as the whole list of important issues in our bilateral relationship and the regional issues that are pressing in the headlines right now,” he said.

Last Monday, as part of his visit to Italy, The Vatican, and Croatia, Pompeo met with Greek Foreign Minister Nikos Dendias to discuss bilateral relations as well as recent tensions in the Eastern Mediterranean.

Asked about calls for dialogue over the long-divided Mediterranean island of Cyprus, Reeker said: “Certainly we continue to call for that, whether any particular party is ready at any particular moment you have to talk to them.”

“But that is what we do and try to encourage,” he added.

Mentioning Pompeo’s visit to the island in August on his way back from a Middle East tour, Reeker said: “He underscored that as well. We want to have a positive relationship with Cyprus; we want to see an end to long-term tensions there.

Reeker – who oversees diplomacy in 50 countries, including Turkey, the EU, and neighboring Armenia and Azerbaijan – also pointed to the rising tensions in the Caucasus over the region of Nagorno-Karabakh, or Upper Karabakh, where renewed conflict broke out last weekend.

“We want to talk about that,” he said, adding that the US along with the other co-chairs of the Minsk group – France and Russia – have called for both Azerbaijan and Armenia to end the military action in the region and return to dialogue.

Turkey has stressed that it stands with Azerbaijan, and that it is wrong to call for a cease-fire before Armenia ends its illegal occupation of Upper Karabakh.

Reeker also laid out the broad agenda of his upcoming meeting with his Turkish counterparts: “We can diminish tensions in all these areas.

“That is better for our broad security stability, that gives us an opportunity to focus on the prosperity agenda, increased trade, energy resources, infrastructure development, all the things that make a real difference in the lives of the Turkish people, of Americans, of the whole region.”

Azerbaijan’s parliament declared a state of war in some of its cities and regions following Armenia’s border violations and attacks in occupied Upper Karabakh.

“That is what diplomacy is all about. Travel is one aspect of that but every trip can’t take every destination at the same time,” he said, referring to how Pompeo did not include Turkey as a destination after his recent visit to Greece.

The US diplomat recalled a meeting this August between Turkish Foreign Minister Mevlut Cavusoglu and his US counterpart Pompeo in the Dominican Republic.

“I’m here on the secretary’s behalf to talk through a number of these issues to underscore our view on the very positive decision Turkey has taken to diminish tensions in the Eastern Med,” he said.

“We can see some progress now getting back at the table where we talk about the resolution of issues by sitting down together,” he added.

On the nearly decade-long Syrian civil war and US sanctions on the Assad regime, Reeker said: “The Assad regime has brought untold horror and brutality on its own people and created enormous instability, a threat to Turkey on its southern border.”

He added, “What we want to see is an end to that conflict,” calling that “the focus of US policy in the region.”

Turkey has also decried Assad’s mistreatment of the Syrian people and the threats to Turkey along its southern border due to the conflict, specifically with the YPG/PKK – a terrorist group that has killed some 40,000 people in Turkey – stepping into the power vacuum left by the conflict. Turkey has launched several cross-border operations to counter that terrorist threat.

Asked about the contradiction between US sanctions on the Assad regime and its silence on oil trade between the regime and the SDF – a group Turkey has charged is another label for the YPG/PKK – US Ambassador David Satterfield, who was also present at the interview, gave a response.

“The best, the most effective means of doing that is providing alternate markets, alternate places in which that oil can go, can be refined, can be distributed,” he argued.

“The contract that [US firm] Delta Crescent Energy has [in Syria] is a contract to assess, to determine the state of the oil system, production, distribution, refining capacities, with an ultimate aim at drawing down and then eliminating this trade to the Assad regime.

“So our intent, both from a policy standpoint and an operations standpoint, is to bring this to a close,” he added.

Following the deal, Turkey denounced the US firm signing an agreement with the YPG/PKK-led SDF to extract, process, and produce oil in northeastern Syria.

Reeker also said that during his visit, Syria, Libya, and other regional conflicts as well as the full range of bilateral relations are among other issues he expects to discuss with his Turkish counterparts.

The US diplomat also rebuffed recent media claims that the US plans to move its forces from Incirlik Air Base in Adana, southern Turkey.

“The United States has no plans to leave the Incirlik Air Base, we have cooperated extremely successfully at the invitation of our Turkish allies at Incirlik for decades,” he said.

“I know there has been some talk in the press speculating to that effect. So I just underscore that again,” he said.

Reeker added that during this visit he is planning to discuss working together with Turkey “particularly in the context of the COVID-19 pandemic, to determine how we can move together to rebuild our economies and real opportunities that our presidents Present [Donald] Trump and President [Recep Tayyip] Erdogan talked about in terms of trade and investment between Turkey and the United States.”

Officials on both sides have pointed to a bilateral trade volume goal of $100 billion.