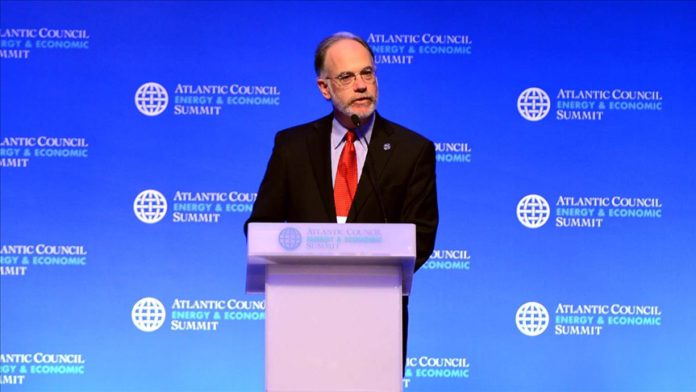 The US on Wednesday denied advocating the establishment of an interim government in Afghanistan amid peace talks with the Taliban.

The US charge d’affaires in Kabul, Ross Wilson, said on Twitter that Washington is committed to bringing about an end to the conflict in Afghanistan through a political settlement that ensures the country remains sovereign, unified, democratic and at peace with itself and its neighbors, while also preserving the gains made over the last 19 years.

“The first phase of Afghanistan Peace Negotiations in Doha constituted an important step forward, but much remains to be done. The United States remains firm in its call for an immediate reduction of violence & ceasefire,” he tweeted.

Wilson said he and US special representative for Afghanistan Zalmay Khalilzad would continue to discuss with Afghans the need to accelerate ongoing peace talks in Doha between Kabul and the Taliban. “We have not advocated, and the United States is not advocating an interim government. The outcomes of Afghanistan Peace Negotiations are up to Afghans & we believe those outcomes should reflect the wishes & aspirations of the Afghan people.”

There were no immediate reactions from the Taliban. However, the group had in the past said that talks on the future government would be among their top priorities in Doha.

These intra-Afghan talks in the Qatari capital, Doha are aimed at ending the nearly two-decade-long conflict that followed a landmark peace deal between the US and Taliban which calls for the withdrawal of all foreign troops from Afghanistan.

President Ashraf Ghani met the Indian official at the Presidential Palace where they discussed how to expand cooperation against terrorism and strengthen the regional consensus on the Afghan peace process, said an official statement.

“The Afghan National and Defense Security Forces are the righteous pillars of Afghanistan’s stability and are fighting in the frontlines against the regional and global terrorism,” the president said.

He also stressed that India and Afghanistan’s joint endeavors in collaboration with NATO and the US could achieve more success in the fight against terrorism.

“Pleased to welcome HE Ajit Doval, the Indian National Security Advisor. We exchanged views on the Peace Process, the beginning of the 2nd round of talks, & the role of India in establishing peace in AFG. I thanked India for its principled position on supporting the peace process,” Abdullah tweeted.