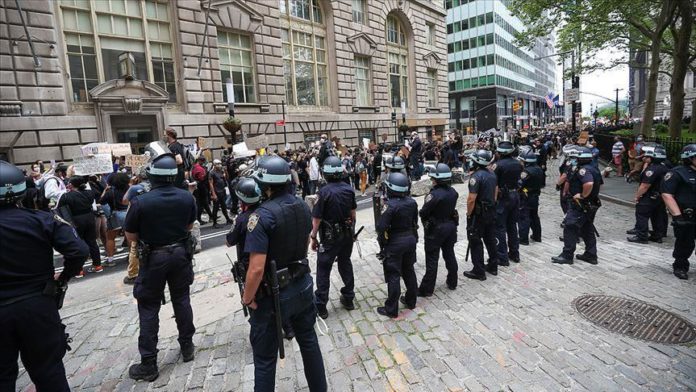 Democrats in the House of Representatives and Senate unveiled Monday a sweeping police reform bill that would institute nationwide changes to law enforcement in response to continued mass demonstrations.

The Justice in Policing Act comes in the wake of George Floyd’s May 25 death, which ignited nationwide protests against police brutality and racial injustice in major cities coast to coast.

Floyd, who was black, died after a since-fired police officer knelt on his neck for nearly nine minutes. Floyd was seen in footage taken by a bystander pleading with the officer to get off his neck, saying he could not breathe before appearing to lose consciousness.

“We must change laws and systems of accountability,” Sen. Cory Booker said while flanked by senators and congress members during a news conference. “We must pass legislation that makes our common values and our common ideals real in the law of our land.”

The sweeping legislation, spearheaded by the Congressional Black Caucus, would bring with it massive reform to law enforcement in America if passed. Among its provisions are a ban on chokeholds, the creation of a federal database to track police misconduct, and mandated use of body cameras nationwide.

It would also significantly curtail what is known as qualified immunity, a legal framework that has a very high threshold for prosecuting officers accused of misconduct. Critics and protesters say it makes it near impossible to hold police accountable in court.

Derek Chauvin, the fired Minneapolis police officer seen kneeling on Floyd’s neck, has been charged with second-degree murder in the case. The three other officers who were at the scene have also been charged.

Minnesota Attorney General Keith Ellison, a former congressman, has noted the uphill battle before prosecutors as they prepare for what is going to be a difficult task in court.

“We’re confident in what we’re doing, but history does show there are clear challenges here,” Ellison said, alluding to the tough court fight ahead.

Biden tests negative for virus after debate with Trump