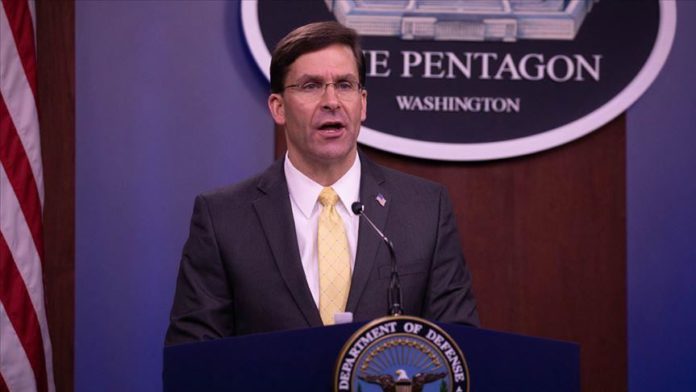 US Defense Secretary Mark Esper said Tuesday he hopes to visit China this year for talks on “crisis communications” and other mutual interests.

Speaking at a security seminar of International Institute for Strategic Studies, Esper said the visit aims to “enhance cooperation on areas of common interest, establish the systems necessary for crisis communications and reinforce our intentions to openly compete in the international system in which we all belong.”

Turning to Beijing’s maritime activity in the South China Sea, he went on to criticize the move, saying the country “has no right to turn international waters into a zone of exclusion for its own maritime empire.”

“We are not in search of conflict,” he added. “We are committed to a constructive and results oriented relationship with China and, within our defense relationship, to open lines of communication and risk reduction.”

The US has a tough stance over the South China Sea and backs South Asian countries against China’s “highly provocative” maritime actions.

Around $5.3 trillion worth of trade cruise through the South China Sea annually, with $1.2 trillion of that total accounting for trade with the US, said the Washington-based think tank in a report, “How Much Trade Transits the South China Sea?” published in 2017.

China claims nearly all of the 3.5-million-square-kilometer of the South China Sea, roughly 90%, and accuses the US and other regional actors of violating its territorial integrity.

February 27, 2020
We use cookies to ensure that we give you the best experience on our website. If you continue to use this site we will assume that you are happy with it.Ok