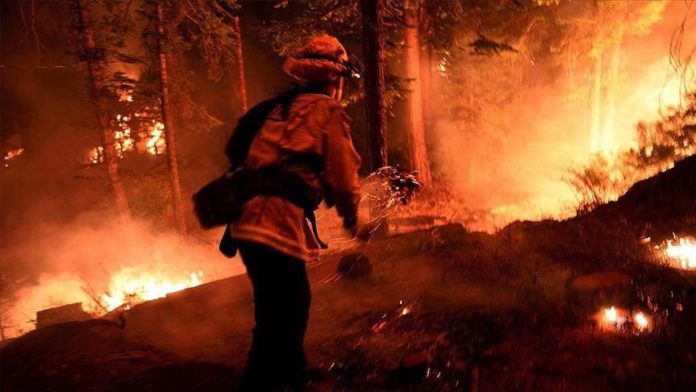 Wildfires spread by gales continue to blaze the US state of California and its northern neighbors, as the death toll reached 10 on Thursday, according to officials.

“As critical fire weather conditions subsided yesterday, firefighters accomplished full containment on one of the many fires burning in the state,” said California Department of Forestry and Fire Protection, also known as Cal Fire, in a statement.

A total of 37 new fires were sparked on Wednesday, of which most of them were rapidly contained but two have grown to large wildfires, Cal Fire said, adding some 14,000 are on the front against 29 major wildfires burning across the Golden State that has a population of about 39.5 million.

In California’s northern neighbor, the state of Oregon, around 500,000 people were evacuated from their homes, more than 10% of the state’s 4.2 million population.

There was a total of 39 simultaneous fires as of Thursday morning in the Beaver State, according to Oregon Office of Emergency Management.

Approximately 587,000 acres of land have burned across the Evergreen State as of Wednesday — more than half the size of record — setting fire season in 2015 when 1 million acres had burned.

Washington State Governor Jay Inslee announced via Twitter on Thursday he has issued a proclamation that will provide 7.6 million state residents with some cash assistance for immediate needs.

“We are not going to surrender the future of this state to climate change … I’ll be thinking of these fires and the communities they’re impacting when we take our next steps to defeat climate change,” Inslee wrote on Twitter.

Some experts point out to climate change and extreme weather conditions for the cause of hot and dry weather and strong winds, as more than 12,000 lightning strikes in August caused widespread blazes across California.

Temperatures rose about 1.8 degrees Fahrenheit (1 degree Celsius) in California while precipitation dropped 30% since 1980, according to research led by California-based Stanford University, which noted that this doubled the number of autumn days, when extreme conditions and risk of wildfires are at the highest level.

Total cost of wildfires is estimated to be more than $800 million so far this year, according to the US’ National Interagency Fire Center.