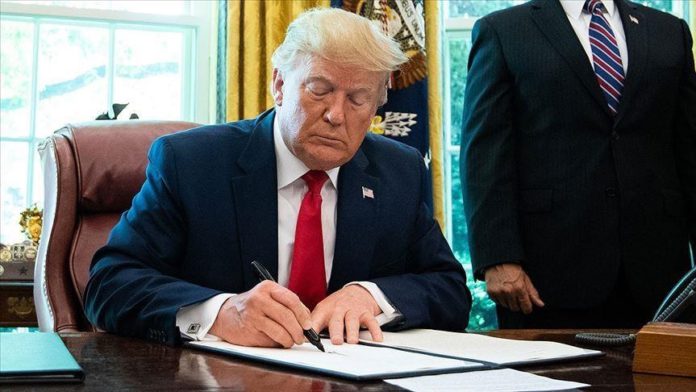 US President Donald Trump announcing this week a wave of pardons was the latest in a series of wielding his clemency powers over the years for war criminals that were convicted of killing civilians in Iraq and Afghanistan.

As US presidents have used their authority for more than two hundred years to offer second chances to some Americans, Trump has issued 70 pardons during his time in the White House as of Wednesday.

Trump’s executive clemency, however, keeps adding controversial military figures after he pardoned four employees of an American private military company who killed civilians in Iraq and were found guilty by a US court in 2014.

Employees of Blackwater Security Consulting, now known as Academi, shot at Iraqi civilians, killing 17 and injuring 20 in Nisour Square, Baghdad on Sept. 16, 2007 as they were escorting a US embassy convoy.

The incident caused five investigations. The FBI found that at least 14 of the 17 Iraqis killed were shot without any cause, including 9- and 11-year-old boys.

Thirty witnesses from Iraq, the largest group of foreign witnesses to travel to US for a criminal trial, had described in the court that the four American men initiated unprovoked shooting at Iraqi civilians with heavy gunfire and grenade launchers.

In the 2014 trial, Nicholas Slatten from the state of Tennessee, a sniper, was found guilty of first-degree murder as prosecutors had said he started the incident by opening fire.

And, Dustin Heard from Tennessee was found guilty of six counts of voluntary manslaughter and 11 counts of attempted manslaughter.

“Seven years ago, these Blackwater contractors unleashed powerful sniper fire, machine guns and grenade launchers on innocent men, women and children,” Ronald Machen, the US Attorney for the District of Columbia, said in his 2014 statement.

Blackwater had a $1 billion government contract to protect American diplomats during the war in Iraq. In a 2007 congressional hearing on Blackwater misconduct, then-owner Erik Prince refused his employees to be defined as “mercenaries” and did not share information about his “private” company.

Blackwater was renamed as Xe Services in 2009, and known as Academi since 2011 after it was acquired by a group of private investors for around $200 million.

Trump in December 2019 ordered the US Navy not to remove Chief Petty Officer Edward Gallagher from its elite SEALs special operations force, and reversed his July 2019 court-martial demotion, saying: “This case was handled very badly from the beginning.”

Gallagher was charged in September 2018 with 10 offenses, some of which included murder, attempted murder, and other war crimes tied to his deployment to Mosul, Iraq.

He was found guilty on a single charge — stabbing to death a wounded 17-year-old Daesh/ISIS prisoner of war with a hunting knife, and posing with his corpse and sending the photo to his friends.

Gallagher, whose nickname was “Blade”, was also accused by fellow Navy SEAL snipers of randomly shooting two Iraqi civilians, a schoolgirl and an elderly man, while veterans reported his conduct to military investigators as being “OK with killing anybody that was moving” and “freaking evil”.

Navy Secretary Richard Spencer was ousted by the White House after he criticized Trump’s intervention in Gallagher’s case.

Lorance in 2012 was charged with two counts of second-degree murder after he ordered his men to open fire on three Afghan men who were on a motorcycle. He was found guilty by a court-martial in 2013 and sentenced to 19 years in prison serving six before receiving Trump’s pardon.

Golsteyn, an Army Green Beret, was charged with murder after killing an Afghan civilian in 2010 who he claimed was a bombmaker for the Taliban killing two Marines. The army closed the case in 2013 but reopened it in 2016.

Trump in May 2019 had pardoned Army 1st Lt. Michael Behanna who was convicted of murder of an Iraqi man in 2008. He was sentenced to 25 years imprisonment, which was later reduced to 15 years, and granted parole in 2014 after serving less than five years of his sentence.