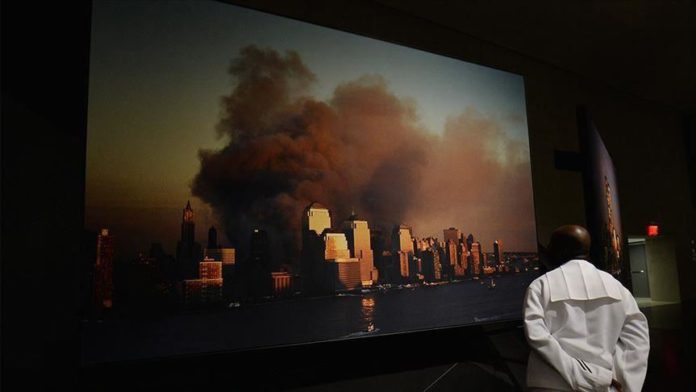 The US solemnly commemorated Friday the nineteenth anniversary of the Sept. 11, 2001 terrorist attacks in which roughly 3,000 lives were taken when al-Qaeda hijackers struck the financial and political capitals of the US.

Several of the annual remembrance ceremonies were dialed down amid the coronavirus pandemic as the US continues to face the world’s worst outbreak.

In New York City, family members did not read aloud the names of their deceased relatives at the National September 11 Memorial & Museum. They were instead played on speakers via pre-recorded messages.

While family members were still invited to the site, they were required to wear masks, and the general public was discouraged from visiting.

A separate ceremony held at the Pentagon was limited to senior Defense Department officials with families to visit the site later in the day.

Speaking at the Flight 93 National Memorial in Shanksville, Pennsylvania where he laid a wreath to honor those who died when they tried to wrest control of a hijacked plane from al-Qaeda operatives, US President Donald Trump hailed their bravery.

“The terrorists on Flight 93 had a fourth target in mind. It was called: our nation’s capital. They were just 20 minutes away from reaching their sinister objective. The only thing that stood between the enemy and a deadly strike at the heart of American democracy was the courage and resolve of 40 men and women — the amazing passengers and crew of Flight 93,” he added.

Slain al-Qaeda leader Osama Bin Laden claimed responsibility for the Sept. 11, 2001 coordinated attacks on New York’s Twin Towers as well as the attack that day on the Pentagon.

The attacks were carried out using three passenger planes hijacked by al-Qaeda operatives. A fourth plane, bound for either the White House or the Capitol building, crashed in a field in Shanksville after passengers attempted to retake it from the hijackers.

Nearly 3,000 people were killed, including citizens of 77 countries, on that day. Hundreds more first responders have died in the nearly two decades since from illnesses they developed while trying to save lives in the smokey and dust-filled ruins of the attacks, particularly in New York City where thick plumes of dark ash filled the air.

Countless other victims were sickened, some fatally, by the debris.

Ahead of visiting New York, Democratic nominee Joe Biden said he suspended all campaign advertising Friday amid the bustling electoral cycle, and would instead focus on commemorating the tragedy.

“I’m not going to make any news today. I’m not going to talk about anything other than 9/11,” Biden told reporters on his way to Ground Zero in New York City. “It’s a solemn day. That’s how we’re going to keep it, okay? You can determine whether I make news but I’m not going to be holding any press conferences.”