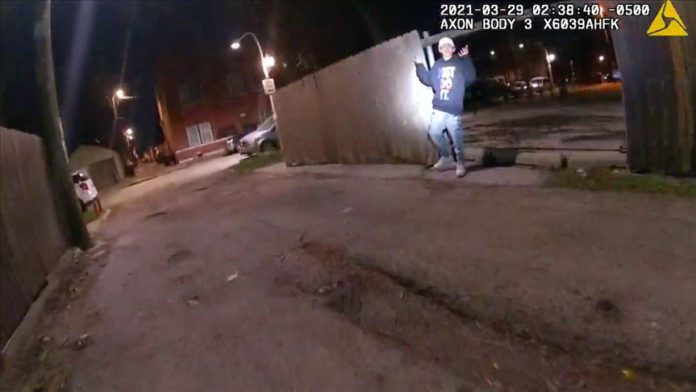 Police in the US city of Chicago released bodycam footage Thursday appearing to show an officer fatally shooting a 13-year-old boy while he had his hands raised.

The video, released by the Civilian Office of Police Accountability (COPA), shows an officer in pursuit of Adam Toledo on foot on March 29 this year, yelling at him to immediately stop running. The officer eventually catches up to the boy, fixing a strobing flashlight on him and commanding Toledo to “show me your “f****** hands.”

Toledo turns toward the officer, appearing to obey his commands with his arms either fully or partially up in the air as the officer tells him to “drop it! Drop it!”

The video appears to show that Toledo was not holding anything in his hands when within a second of the officer issuing his command, he opens fire on the boy, firing a fatal shot into his chest which sends Toledo’s body lurching to the pavement below.

Toledo is then seen gasping for air while lying on the concrete, blood pouring out of his mouth and nose and covering the black hoodie he was wearing emblazoned with Nike’s “Just Do It” slogan.

The officer radios for an ambulance and begins to administer CPR while other officers come on the scene, eventually taking over applying medical aid on Toledo.

Police have said Toledo had a handgun on him when he was shot. The video, one of several posted by COPA, appears to show another officer shining a light on a gun nearby where Toledo was lying.

It is unclear how it got there.

Chicago Mayor Lori Lightfoot said at a news conference that the videos of Toledo’s shooting “are incredibly difficult to watch.”

“We live in a city that is traumatized by a long history of police violence and misconduct,” she said, urging residents to “wait until we hear all the facts.”

“While we don’t have enough information to be the judge and jury of this particular situation, it is certainly understandable why so many of our residents are feeling that all too familiar surge of outrage and pain. It is even clearer that trust between our community and law enforcement is far from healed and remains badly broken,” she added.

Family attorney Adeena Weiss-Ortiz said the police bodycam footage makes clear that Toledo was shot when he did not possess a weapon.

“I don’t think it matters whether Adam is a choir boy, whether he is involved in some other untoward activity. The fact of the matter is that he was walking in the street and he was shot unarmed,” Weiss-Ortiz told reporters during a news conference. “Those videos speak for themselves.”