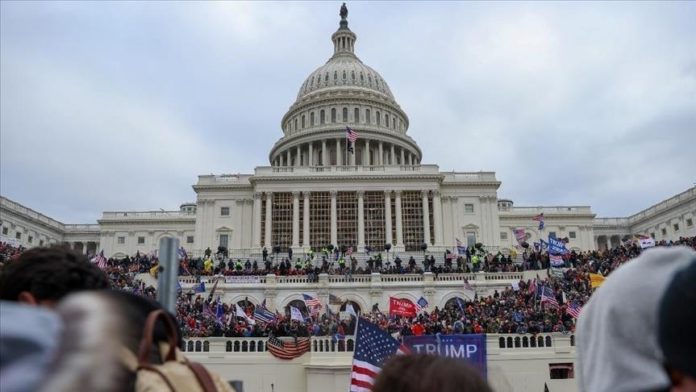 The US charged the leaders of the far-right Oath Keepers anti-government militia and 10 others for their alleged involvement in the Jan. 6, 2021, Capitol insurrection, the Justice Department announced Thursday.

Stewart Rhodes, 56, the group’s leader and founder, was arrested Thursday in Little Elm, Texas after a federal grand jury in Washington, D.C. indicted him and 10 other defendants Wednesday with seditious conspiracy and other charges.

The indictment was unsealed Thursday. The seditious conspiracy charge carries a statutory maximum of 20 years in prison.

Vallejo and Rhodes are being charged for the first time. Nine others who were previously charged were also named in the indictment.

Rhodes is alleged to have conspired with his co-defendants and others to prevent by force Joe Biden’s 2021 inauguration as president, and coordinated to ensure Oath Keepers from around the country were in Washington, D.C. on Jan. 6 when former President Donald Trump called his supporters to the nation’s capital.

Rhodes allegedly entered restricted areas of the Capitol but not the building itself on Jan. 6 as lawmakers were carrying out their constitutional duties ahead of Biden’s inauguration.

He also coordinated other smaller groups of Oath Keepers who were staged just outside Washington, D.C. as armed “quick reaction forces” (QRF), the Justice Department said in a statement.

The teams were positioned “to rapidly transport firearms and other weapons into Washington, D.C., in support of operations aimed at using force to stop the lawful transfer of presidential power,” it added.

Vallejo is listed as one of two QRF leaders and was allegedly stationed at the Comfort Inn in Ballston, Virginia.

The other is identified as Thomas Caldwell, a 65-year-old resident of Virginia, who was previously charged with felony conspiracy and obstruction of an official proceeding.

“We will have several well equipped QRFs outside DC. And there are many, many others, from other groups, who will be watching and waiting on the outside in case of worst case scenarios,” Rhoades allegedly said the morning of Jan. 6 in an encrypted group chat.

More than 725 individuals have been arrested on charges related to the Capitol riot.