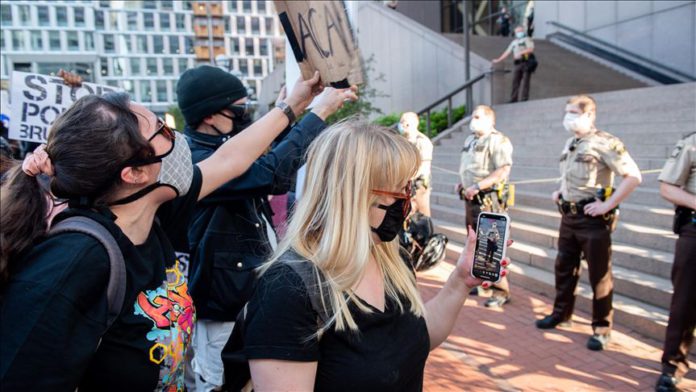 Several Hollywood heavyweights are throwing their weight behind a program to help low-income demonstrators in Minneapolis city of Minnesota state make bail amid ongoing protests there.

Steve Carell, Ben Schwartz and Seth Rogan have said they have donated to the Minnesota Freedom Fund, a non-profit organization that is helping protesters who have been arrested amid days of protests prompted by the death of a black man who died after a police officer pinned his neck to the ground with his knee for minutes-on-end during a fatal arrest.

The fundraiser gained traction among celebrities after the Safdie brothers, a pair of renowned filmmakers whose works have included Uncut Gems and Good Time, retweeted a message asking to match a $50 donation to the fund.

“Matched,” they wrote, as the initiative took off first through Rogen’s Twitter account, then hit Schwartz’s and Carell’s in a span of hours Thursday.

Floyd, 46, appeared to lose consciousness, but the officer maintained his position on the victim.

His pulse was checked about three minutes after he stopped gasping for air, but it is unclear from the video what the assessment was at that point. He was then loaded on to a stretcher and moved into an ambulance.

Four officers have been fired over Floyd’s death, which sparked mass protests and an outcry against police brutality.

His death has strong parallels to that of Eric Garner, who died during a fatal 2014 arrest in New York, repeatedly pleading with officers, “I can’t breathe.”