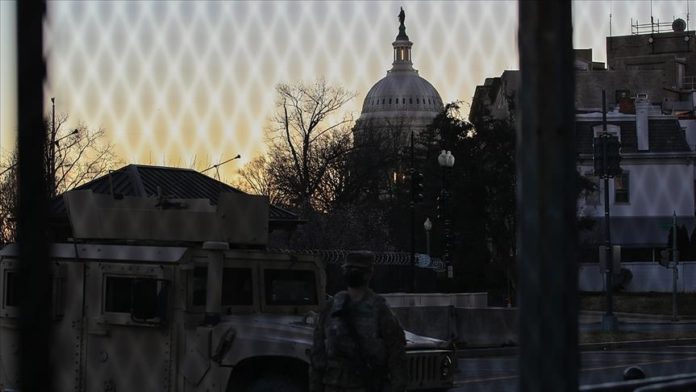 US Capitol Police have requested a 60-day extension of the National Guard’s troop deployment to bolster the federal legislature amid continued threats from militia groups, a lawmaker said Thursday.

Congresswoman Elissa Slotkin, a former top Pentagon official and CIA analyst, confirmed the request to stay beyond the March 12 deadline.

“I am hearing from contacts at the National Guard that the U.S. Capitol Police have asked for a 60-day extension of the Guard’s mission in and around the Capitol, and that the Guard is soliciting states to send contributions,” she said in a series of Twitter posts.

“No one likes seeing the fortress-like security around the Capitol. And no one wants to again have a security problem in and around this symbolic place,” added Slotkin.

A Defense Department official confirmed in an email exchange with Anadolu Agency that the Pentagon “has received a request for continued support from the US Capitol Police, and is currently reviewing that request.” The official deferred to Capitol Police on specifics of the request.

The development comes amid heightened security at the Capitol after law enforcement “obtained intelligence that shows a possible plot to breach the Capitol by an identified militia group on Thursday, March 4.”

“We are taking the intelligence seriously. Due to the sensitive nature of this information, we cannot provide additional details at this time,” Capitol Police said in a statement on Wednesday.

The QAnon conspiracy theory pegs March 4, which is the original inauguration day used until the early 20th century, as the day former President Donald Trump would return to power after losing the 2020 presidential election.

The conspiracy theory is popular among some of Trump’s supporters, and many of those who stormed the Capitol on Jan. 6 adhered to its false beliefs. It essentially holds that Trump was at war with a secret cabal of Satan-worshiping pedophile liberals who kill and eat children.

The Capitol insurrection has emboldened many among far-right extremist groups.

More than 300 people have been arrested in connection with the attack, including several US military veterans.