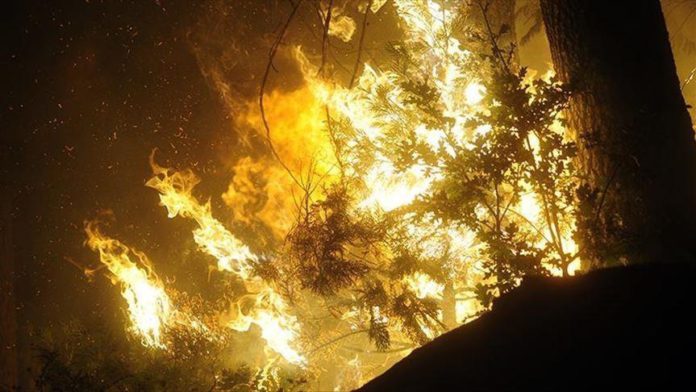 Residents of the nation’s capital and surrounding communities in northern Virginia and Baltimore, Maryland, were under an air quality alert Wednesday because of wildfires burning thousands of miles away.

The National Weather Service issued an “Orange” alert for the Washington D.C. area, which warns that “sensitive” groups of people are in danger of breathing unhealthy air: young people, senior citizens and those with asthma, heart disease and lung problems. Those groups were warned to avoid strenuous activities and outdoor exercise.

There were already hazy skies in the D.C. region on Tuesday, as there have been for days in other parts of the country, but the Washington Metropolitan Council on Governments said the haziness reached unhealthy levels by Wednesday.

There are towering clouds of smoke that look like ash from a volcano, billowing from the so-called “Bootleg” fire in southern Oregon, about 2,735 miles (4,400 kilometers) from D.C.

Much of the smoke is being carried by the jet stream north to Canada and back down to the Midwest and on to the Eastern seaboard of the US.

And it is not just the Bootleg fire. The National Interagency Fire Center said there are 78 large wildfires burning in 13 mostly Western states, fueled by record-breaking heat that gripped the states of Oregon and Washington, along with Canada, in late June.

Even this week, temperatures in that region are above normal.

The possibility of thunderstorms in D.C. on Wednesday night would help clear the unhealthy air.

And even as D.C. dealt with bad air during the day, some lawmakers were indoors, lamenting that climate change is widely believed to be causing the extreme heat, droughts, and wildfires in the west, and now affecting the rest of the country.

Democratic congress Sean Casten from the state of Illinois, during a hearing Wednesday on extreme heat for an Environment Subcommittee, said, “This makes me very sad.”

He pointed to a deadly heatwave in Chicago that killed more than 700 people in 1995. “The people who died were the least among us, people who couldn’t afford air conditioning.”

“Future generations,” he said, are going to wonder why we did not do more to battle climate change.