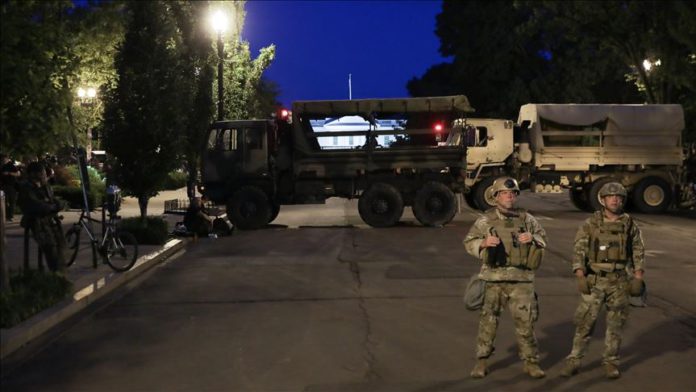 Thousands of peaceful demonstrators gathered in Washington, DC for the sixth consecutive day Wednesday to protest the death of George Floyd, an unarmed black man who died last week after being pinned down by a white police officer.

This time, the protestors were not allowed to approach Lafayette Park across from the White House amid a heavy military presence.

They chanted slogans including “Black Lives Matter,” “George Floyd” and “No Justice, No Peace.”

There were no clashes between the protestors and security forces. The park is still closed off with a tall metal fence.

Mike Butler, an Illinois resident who was visiting his friend in Richmond, Virginia, joined the demonstration to support the protestors, who have been out since Friday night.

He said he watched the viral video of Floyd being pinned down by now-fired white police officer Derek Chauvin and that “it is absolutely sickening, it is awful.”

He said President Donald Trump should be out with people and engaging in more open dialogue instead of posting tweets calling for the shooting of looters.

“He is not actually addressing the point why people are protesting and looting in the first place,” he added.

Perrie, in her late 20s, who asked not to give her last name, said the demonstrations are peaceful and nothing bad has happened so far, adding that “understanding” would at least soothe the protests.

“There has been free food, free water, free phone charges. There are just great people here,” she said of the prevailing atmosphere.

Speaking about her feelings when watching the video, she said “it feels awful” when bystanders were watching it and they couldn’t do anything about it.”

“What is terrible is it happened multiple times on different occasions to other black women and men. It does not get media coverage enough. It happens all the time, every day,” she said, calling for justice for all victims of police violence.

“Until there is an actual change legislatively made at this point, [protests] are not going to be quiet,” said Butler.

Both Butler and Perrie called for the protestors to “keep going.”

He said he worries he could be the next victim of police brutality.

“At some point, the protests will end. They will end when people fully understand” and justice is served for the victims of police violence and “when they stop systemic oppression against blacks.”

“Until people accept the fact that you don’t have to get scared of black people. Why are you scared of us? Without us, this city would be nothing.”

George Floyd died on May 25 after since-fired Minneapolis police officer Derek Chauvin pinned his neck to the ground for nearly nine minutes, despite Floyd’s repeated pleas that he could not breathe.