TurkishPress
Home News US calls on China to comply with steps requested by ILO in... 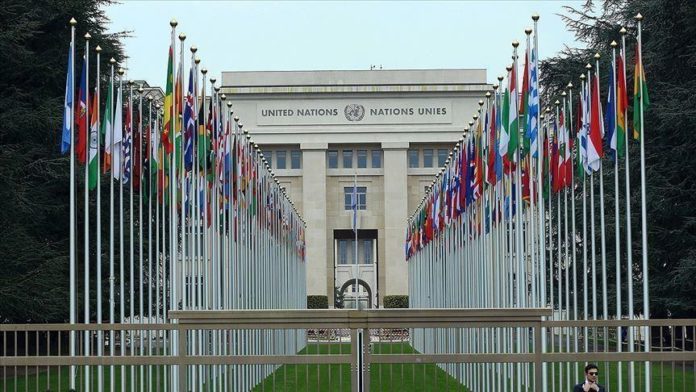 The US on Friday called on China to comply with steps requested by an International Labor Organization (ILO) committee that Beijing should review, repeal, and revise laws and practices of employment discrimination against racial and religious minorities in Xinjiang.

The US Mission to the UN in Geneva said in a statement that the Department of State welcomes the report by the ILO committee that refers to practices that particularly affect the mainly Muslim Uyghurs who live in Xinjiang.

“The Committee requests the (Chinese) government to continue to provide information on the measures taken, and their results, to promote equality of opportunity and treatment for ethnic and religious minorities,” said the committee’s report published along with the ILO’s annual report.

The report cited examples of how China discriminates and said Beijing should indicate how “the social partners and the groups concerned are consulted when designing and implementing such measures.”

The ILO’s Committee of Experts on the Application of Conventions and Recommendations made its recommendations as a first step in its report published this week.

It also requested the ILO’s Committee take up its report on the Application of Standards during the upcoming International Labour Conference in June.

“This report, produced by the ILO’s Committee of Experts on the Application of Conventions and Recommendations, expresses deep concern regarding the PRC’s (People’s Republic of China’s) policies and calls on the PRC government to take specific steps toward eliminating racial and religious discrimination,” said the US statement.

The State Department noted that the report calls on China to “amend national and regional policies utilizing vocational training and rehabilitation centers for ‘political re-education’ based on administrative detention.”

The US noted that China joined the ILO in 1919 as one of the founding states.

Call for China to take steps

“The United States calls on the PRC to take the steps requested by the Committee of Experts,” said the statement.

It also reiterates the US call for China “to end its genocide and crimes against humanity perpetrated against the predominantly Muslim Uyghurs and members of other ethnic and religious minority groups in Xinjiang.”

The statement noted that the committee’s calls also refer “to its use of these groups for forced labor in Xinjiang and beyond.”

The US said it seeks to work with its international partners and allies “to end forced labor and strengthen international action against the ongoing genocide and crimes against humanity in Xinjiang.”

The State Department said on its website: “Over the last four years, the People’s Republic of China has carried out a mass detention and political indoctrination campaign against Uyghurs, who are predominantly Muslim, and members of other ethnic and religious minority groups in the Xinjiang Uyghur Autonomous Region (Xinjiang), a large region in western China.”

According to the UN data, at least 1 million Uyghurs are kept against their will in places Beijing calls “vocational training centers” which the international community defines as “re-education camps.”

China does not provide information on how many camps there are in Xinjiang, how many people stay there, and how many of them have returned to social life.

While the UN and other international organizations have reiterated their calls for the camps to be opened for inspection, China has allowed a few of its designated centers to be partially viewed by a small number of foreign diplomats and journalists.