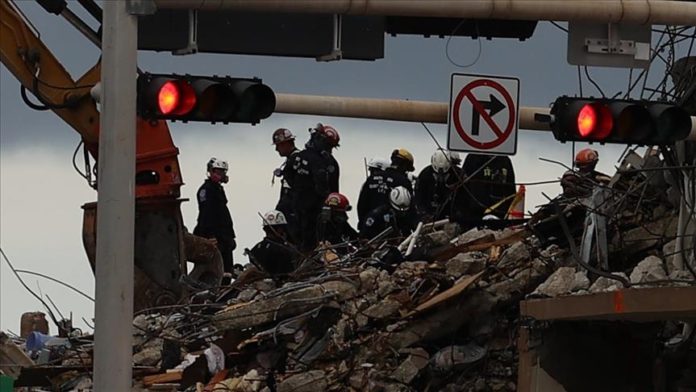 Search and rescue operations at a partially collapsed condominium building have been halted because of concerns that the remainder of the building could fall, officials said Thursday.

Miami-Dade County Mayor Daniella Levine Cava said the effort was halted around 2 a.m. and that officials would resume the search for survivors “as soon as it is safe to do so.”

“Our engineers are continuing to monitor the structure as we’ve paused operations to evaluate the situation, and all possible options and next steps,” she said, adding that US President Joe Biden’s visit on Thursday “will have no impact on what happens at this site.”

At issue is the movement of about 6 – 12 inches (15.2-30.5 centimeters) in a large column that is hanging from the structure, and which could “fall and cause damage to the support columns in the subterranean garage area,” Miami-Dade Fire Rescue Chief Alan Cominsky told reporters.

There is also “slight movement” in concrete floor slabs that Cominsky said “could cause the additional failure of the building.”

The remains of five more people were pulled from the debris Wednesday, raising the death toll to 18 as 145 victims remain missing. No survivors have been pulled from the concrete and metal rubble since operations began last Thursday after a wing of the 12-story Champlain Towers South pancaked with floors crashing down into one another.

The collapse happened in the early morning hours when many residents were likely asleep.