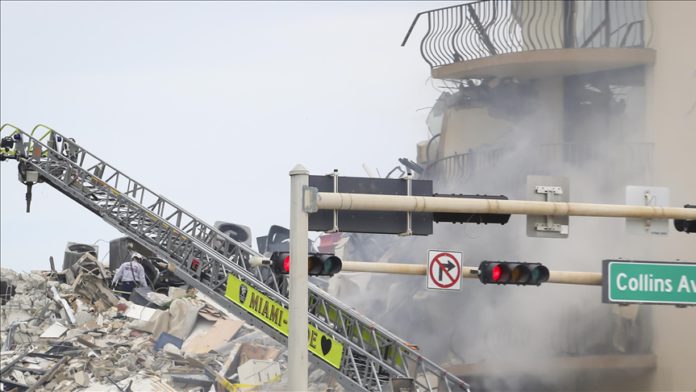 The death toll following a partial building collapse in Surfside of US state of Florida has risen to 20 as officials said on Friday after two more bodies were pulled from the rubble ahead of a coming storm.

A 7 year-old daughter of a Miami firefighter was among the recovered bodies, Miami-Dade County Mayor Daniella Levine Cava told reporters. In all, 128 people remain missing.

No one has been pulled from the debris of the 12-story Champlain Towers South since the search began on June 24.

Rescue efforts resumed on Thursday evening after they ground to a halt earlier in the day over concerns that a large column hanging from the still-standing portion of the building could fall and damage support columns in an underground garage where first responders are working.

Authorities are working on plans to demolish the remaining structure.

Tropical storm-force winds are expected to hit the area of the collapse around mid-day Sunday as Hurricane Elsa continues to move through the Caribbean. The storm is expected to reach Florida between Monday and Tuesday.

Officials are closely monitoring the storm, which has strengthened into a Category 1 hurricane.