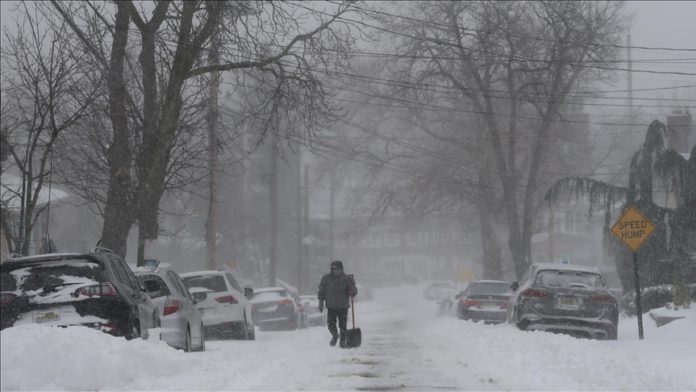 A winter storm is expected to wreak havoc on a nearly 2,000-mile swath of the US over the next few days, bringing heavy snow, ice and bitter cold temperatures.

The National Weather Service issued winter storm watches and warnings Tuesday from as far south as Texas and New Mexico to the Midwest states of Michigan and Illinois and as far east as New York and Vermont.

New Mexico is bracing for the possibility of 14 inches of snow in some areas, and many lower lying areas will remain below freezing for several days.

In an interview with The New York Times, Brian Guyer, a meteorologist for the National Weather Service, said temperatures in parts of eastern New Mexico could feel like 20 to 25 degrees below zero with the wind chill factor.

“It’s uncommon for us to have the combination of snow with the temperatures that we’re expected to see,” he said.

Nearly one year after a massive winter storm crippled the power grid system in Texas, causing hundreds of deaths and leaving millions without electricity, state officials are assuring residents they are ready this time around.

“We know the reforms we have put in place over these last few months and assure that our grids are reliable and ready for this winter weather event,” said Texas Public Utility Commission Chairman Peter Lake at a news conference.

Texas Governor Greg Abbott admitted there are no guarantees when it comes to a massive winter storm like the one on its way but expressed confidence in the state’s plan to add more power reserves to make sure there is additional electricity supply on hand sooner than later.

“What we’re going to work to achieve, and what we’re ready to achieve, is that the power is going to stay on statewide,” said Abbott.