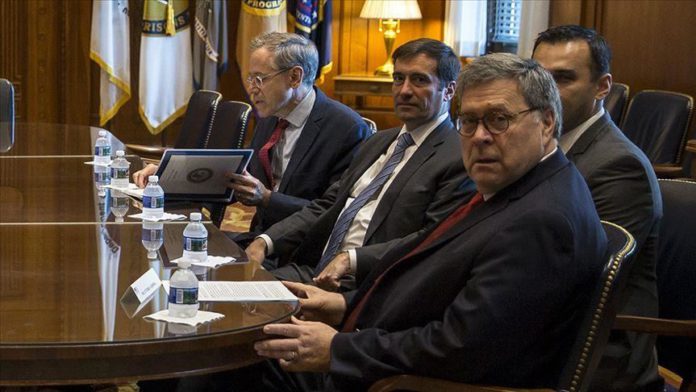 Attorney General William Barr accused Thursday Hollywood and American tech giants of collaborating with China in what he said is its quest to use “its economic power to change America.”

“If what happened in China stayed in China, that would all be bad enough,” Barr said during remarks delivered at the Gerald Ford Presidential Museum. “The People’s Republic of China is now engaged in an economic blitzkrieg—an aggressive, orchestrated, whole-of-government, indeed, whole-of-society, campaign to seize the commanding heights of the global economy and to surpass the United States as the world’s preeminent superpower.”

Barr pointed to actions taken by movie studios including Paramount Pictures and Walt Disney Co., the latter of which he said has been “compromising its principles” in order to screen films in China and operate a theme park in Shanghai.

“I suspect Walt Disney would be disheartened to see how the company he founded deals with the foreign dictatorships of our day,” he said.

Moreover, he said Hollywood in general has been more than willing to censor its films in order “to appease the Chinese Communist Party.”

“This censorship infects not only versions of movies that are released in China, but also many that are shown in American theaters to American audiences,” he said.

Turning to big tech, Barr said Google, Apple Microsoft and Yahoo “have shown themselves all too willing to collaborate” with and “kowtowing” to the Chinese Communist Party, allowing themselves to become “pawns of Chinese influence.”

The comments come as tensions between the world’s preeminent superpowers continues to sit on a razor’s edge. Relations soured dramatically following the global spread of the novel coronavirus, which originated in China in late 2019 before spread to every corner of the globe and killing over 585,000 people.

Barr said ultimately China’s goal is to co-opt American industries in order to form local competitors, saying China’s leadership has sought “to exploit the openness of our institutions in order to destroy them.”

“American companies must understand the stakes,” he said.

“The Chinese Communist Party thinks in terms of decades and centuries, while we tend to focus on the next quarterly earnings report. But if Disney and other American corporations continue to bow to Beijing, they risk undermining both their own future competitiveness and prosperity, as well as the classical liberal order that has allowed them to thrive.”

July 20, 2020
We use cookies to ensure that we give you the best experience on our website. If you continue to use this site we will assume that you are happy with it.Ok