TurkishPress
Home News US: Australia to investigate attack on its journalists 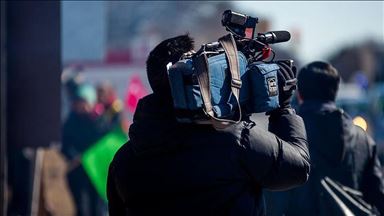 Treating the matter “very serious”, Australia is investigating assault on two of its journalists by US police during the ongoing “I can’t breathe” protests, said the foreign minister on Tuesday.

Australia’s Channel 7 News cameraman Tim Myers was reportedly punched and hit with a shield while its US correspondent Amelia Brace was hit in the backside with a rubber bullet on Monday.

Foreign Minister Marise Payne said the government was treating the incident as a “very serious matter”.

Morrison also offered the TV network his government’s support should it wish to pursue a formal complaint.

“I want to get further advice on how we would go about registering Australia’s strong concerns with the responsible local authorities in Washington,” Payne said.

“So, our embassy in the US will approach the relevant authorities, and Channel 7 will also provide us with their views on how they wish to deal with it,” she added.

Protests have been raging in the US for the last week over the death of George Floyd, an unarmed black man, at the hands of police in Minneapolis, Minnesota on May 25.

Donald Trump administration has called in National Guards to battle the growing protests seeking justice, while 40 cities are under curfew across the country to stop the spread of the unrest which witnessed massive violence.