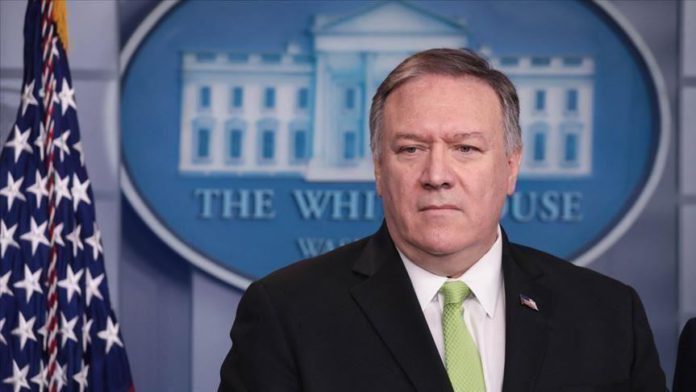 US Secretary of State Mike Pompeo announced Tuesday more than $696 million in humanitarian aid will be delivered to Syrians.

The help is “in response to the ongoing crisis caused by the Assad regime, Russian, and Iranian forces,” he said, noting additional aid brings total US humanitarian response in Syria to more than $11.3 billion.

He urged the international community to remain committed to meeting the growing needs of the Syrian people, “a responsibility the Assad regime has proven unwilling to uphold.”

Pompeo said the initial announcement on the aid was made by Special Representative for Syria Engagement Ambassador James Jeffrey during a conference Tuesday hosted by the EU.

The international community relies on cross-border access to deliver assistance and he said the US “strongly” supports UN Secretary-General Antonio Guterres’ recommendation to restore cross-border operations.

Sources who spoke on the condition of anonymity told Anadolu Agency on Saturday the US has provided $21 million in financial aid to YPG/PKK-led Syrian Democratic Forces (SDF) to alleviate effects of the Caesar Act.

The PKK is a designated terrorist organization in Turkey and the US, but Washington has refrained from similarly labeling its Syrian cousin as it continues to rely heavily on the YPG as its primary partner in northeastern Syria despite Ankara’s objections.

Aid came one day after the US announced a “sustained sanctions” campaign against the Syrian regime and its allies.

Washington imposed sanctions June 17 on Bashar Al-Assad, his wife and his inner circle for alleged involvement in war crimes, as part of the Caesar Syria Civilian Protection Act.

US President Donald Trump signed the Act in December.

A State Department spokesperson rejected the claim and said the agency has not provided any financial help to the SDF.

Hundreds of thousands of people have been killed since and more than 10 million displaced, according to UN figures.